Q&A: Exposing the realities of eviction 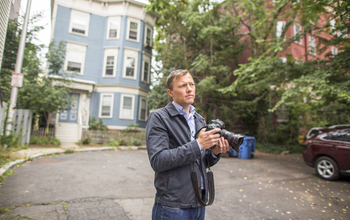 “Eviction” is a term that has become increasingly familiar to Americans over the past decade as one of the most visible symbols of poverty and economic misfortune. But research by social scientist and ethnographer Matthew Desmond shows that the reality of eviction is more complicated than traditional narratives might indicate.

Notably, Desmond says, eviction can actually serve as a cause of poverty, rather than an effect.

“One of our studies shows eviction can cause higher rates of job loss,” said Desmond, a professor at Harvard University, whose work received support from the National Science Foundation’s (NSF) Social, Behavioral and Economic Sciences Directorate. “Prior to that, I thought it was the other way around — that job loss causes eviction. It certainly does in some cases, but we have stronger evidence showing that eviction leads to job loss.”

Desmond said eviction can destabilize people who were already in economically vulnerable positions. “It causes folks who didn’t have great jobs in the first place to lose those jobs,” he said.

Work by Desmond and his team of researchers has proven influential in the social science world, as have his methods for gathering and analyzing data on a topic where reliable information can be difficult to find. His research team draws on state-level data, court records, police reports and personal interactions. Desmond spent months living in a trailer park and inner-city apartments to meet families experiencing poverty and affected by eviction.

The team’s work in Wisconsin led to the creation of the Milwaukee Area Renters Study, a synthesis of data that sheds light on the causes and consequences of eviction.

The researchers are currently expanding their work to other areas of the country, and the MacArthur Foundation recognized Desmond’s efforts by naming him a 2015 fellow.

Evictions were once rare enough in the United States that they could draw protests from neighbors trying to prevent them, Desmond said. Today, he says, “low-income families are used to the rumble of the moving truck,” making evictions more important to study now than ever.

Q: Could you describe the focus of your research on evictions?

A: We’ve reached the point in America where most poor families spend most of their incomes on housing costs, and evictions have become commonplace for low-income families. One of the most surprising things that I learned through my research was just how prevalent eviction is. One in every eight renters in Milwaukee is evicted every two years — that was shocking to me.

A big part of our research has been cataloguing the consequences of eviction. We’ve established findings that link evictions to job loss, to higher rates of depression, to much higher rates of material hardship, and to relocation into worse housing and neighborhoods. It seems to affect folks in a lot of different dimensions, which supports the case that eviction isn’t just a condition of poverty — it’s actually a cause. To really understand poverty, we have to understand that a lack of affordable housing is a big part of the story.

Q: Could you expand on the idea that often when you’re evicted you wind up living in a much worse place?

A: This is one thing I saw by following families over time. After their evictions, they’d move into places with no water, with stopped-up plumbing, with cockroach infestations, with no locks on the doors. We know from public health research that those kinds of housing conditions are linked to asthma and depression. I think one of the reasons we find eviction is related to depression in mothers, even two years after it happened, is because it’s an incredibly traumatic process that gets under your skin.

Q: What are some of the other effects of eviction? Can it harm your work or education status?

A: When you go through an eviction, it really takes over your life. A lot of the families that I spend time with, their kids would miss school for long periods for the same reason farm kids 100 years ago would have: their homes have more pressing problems than them getting to school. So eviction does have consequences for school stability and absenteeism.

Q: You’ve talked about how one of the toughest challenges for on-the-ground research in this area is asking people whether they have been evicted. How did that affect the ways in which you conducted your research?

A: Part of the issue was just realizing that there was a problem. We’ve had material hardship studies since the ’80s that have asked the eviction question, and they always came back with really low numbers — 1 percent or 2 percent. Then you look at the court records and you see much higher numbers and you think “What’s going on? Where’s the disconnect?”

Spending time on the ground, living in communities affected and alongside families affected by eviction and talking about what they’re going through led me to realize we’d been asking the question the wrong way. That led to the creation of a new survey instrument, where we’d start off by saying “This is what an eviction looks like. Have you been evicted?” Then we asked things like “Did you move because your landlord told you to?” or “Did you move because you thought you were going to get evicted?” These really broadened the question and we got much higher numbers.

Q: For a sociologist or ethnographer studying poverty, is there a big database with helpful data available?

A: No. You really have to hustle for the data. There’s no national database that has solid numbers on eviction. The American Housing Survey is incorporating the work we did in Milwaukee into its next iteration, which is great because in a few years we will have solid survey data on eviction. One thing we’re doing is collecting eviction records from all over the country, but I’ve got to tell you — it’s tough. Some states store those data at the state level, so we now have records going back to the mid-’90s for Nebraska and Hawaii, for example. In other states, it’s not even stored at the county level; judges keep those data.

Q: Has your view of eviction changed throughout your research?

A: There’s kind of a baseline assumption about eviction — that someone loses a job or gets addicted, then they get evicted. The reality is that there is a non-trivial number of families that are just at risk of eviction every day. They’re paying 70 to 80 percent of their income on housing and just a little thing can lead to eviction. There’s evidence that shows that a lot of folks get evicted over relatively small sums of money. I think that the inevitability of eviction in the lives of the poor is something that I’ve come to accept as a reality for people below the poverty line.