After the lecture: Physicist Anthony Leggett 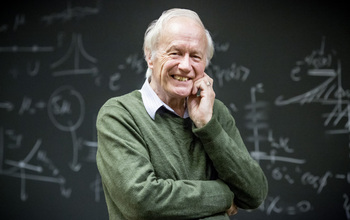 University of Illinois physicist Anthony Leggett is known for his contributions to understanding helium-3, including why at low temperatures it becomes a superfluid, or a liquid that flows without apparent friction and conducts electricity without resistance.

The Nobel laureate’s work on helium-3 — a non-radioactive isotope found on Earth and in lunar soil — helped establish foundational theory for many areas of physics and material science. Advances in those fields are creating a path toward future electronics and quantum information systems.

Leggett recently delivered a talk titled “What can we do with a quantum liquid?” as part of the National Science Foundation’s (NSF) Distinguished Lectures in Mathematical and Physical Sciences series. After his lecture, Leggett described to NSF how he relishes exploring the “whys” of physical laws — something he gleaned from initial college days at Oxford University where he studied Greek and Latin languages, literature, ancient history and philosophy. This South London native divides his research time into multiple projects these days and still has time to ponder whether we have a real understanding of the flow of time.

Every time there’s been a major revolution in physics it’s involved an overthrow of an idea that until that time seemed like common sense.

I think philosophers by nature of their vocation always ask two fundamental questions: What do you mean, and how do you know? It’s always been my instinct to ask those questions. As it turns out, the answers are often not as trivial as some colleagues would think.

The project soaking up most of my research time for the past three or four years involves topological quantum computing. All the theoretical work in the past 13 years has really used the same theoretical approach, which has worked — as far as we know — really well. The question I’ve been trying to ask is, “Does it still work in delicate situations like topological quantum computing?” And I have reasons to doubt that it does.

The single idea I’m most proud of is the idea that a particular phase transition involving the two principal superfluid forms of helium-3 is actually generated by the incidence of cosmic rays. I’m proud because it’s very unlikely that any massive computation would come up with that.

My biggest frustration has been not being able to make a crisp formulation about a question that has been bothering me most of my career, actually. That is the question of the basis for perceived direction of time. One basic, common-sense principle that has never been seriously challenged is the idea of the direction of time — that the past and present can affect the future but not vice versa. It really is a fundamental mystery and not resolved by standard arguments.

Many people think this is a completely solved and trivial problem. I don’t think that, but the challenge is making a formulation crisp enough that it has any relation to experiments.

What attracted me to work on superfluid helium-3 was that it seemed there really was a chance the basic laws of physics were breaking down under these conditions. In fact, that was the initial conjecture I made. And the first task I set for myself was to try to demonstrate this more formally — to demonstrate that if the ordinary rules of quantum mechanics applied, and the ordinary rules of statistical mechanics applied, then these experimental results could not happen. In other words, something fundamental must be breaking down.

Throughout the years, I think I have learned just as much from my teaching as my research pursuits.

Oh yes, I do recall a particular passage from The Odes of Horace: “Exegi monumentum aere perennius,” such and such. [Translation: I have erected a memorial more enduring than brass.]

There’s a constellation of novelists I really rather like, all West African. I spent time in Ghana. These books tend to have a sort of tautness, perhaps because life in most West African countries today is not comfortable or convenient.

On a professional level, as a physicist, I admire Lev Landau. On a personal level, however, I don’t think I would have liked him.

I think, surprisingly, my most impactful paper is probably a little paper I wrote about scientific English for Japanese physicists.

I always feel that some serendipity helped me to do my work on superfluid helium-3. I tell my students to at least try to take a shot at thinking things out for yourself and not to be too worried about existing literature before they go and spend too much time reading that literature.

I encourage students to follow their own curiosity and not to worry if others say it seems trivial. I always point to Einstein’s question, which was why do all bodies — independent of their shape, composition or mass — fall at the same rate in vacuum in the Earth’s gravitational field? People had known this since Galileo, 300 years before, but Einstein was the first person to ask why. And that led to general relativity. So, I think you have to ask the silly questions.

University of Illinois at Urbana-Champaign