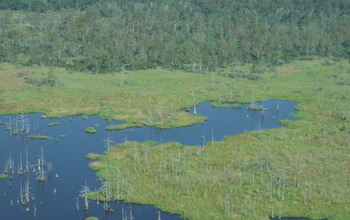 Without major efforts to rebuild Louisiana’s wetlands, which serve as bulwarks against waves and rising seas, the state’s coast has little chance of withstanding the accelerating rate of sea level rise, a new study concludes.

Results of the research, funded by the National Science Foundation (NSF) and conducted by scientists at Tulane University, are published in the journal Nature Communications. They show the rate of sea level rise in the region over the past six to 10 years amounting to half an inch per year, on average.

Wetlands can provide crucial protection from rising seas, especially in Louisiana’s low-lying westernmost areas, but the habitats have faced years of decline, mostly from coastal erosion.

The erosion results in part from levees that have been built along the Mississippi River. The levees block mud deposits that flow to and underlie much of the Louisiana coast. The land, cut off from new building material, begins to sink.

“In the westernmost part of coastal Louisiana, many of the sites we studied are on track to drown,” said Tulane geologist Torbjörn Törnqvist, co-author of the study. “This is why it is such an important setting to assess what may happen elsewhere later in this century, when global sea level rise accelerates.”

That sinking is compounded by rising seas washing over fragile wetlands, further degrading them. Over time, wetland plants die, eroding the mud foundations the plants once helped support.

Törnqvist conducted the research with lead author Krista Jankowski, also of Tulane, and co-author Anjali Fernandes of the University of Connecticut.

“These researchers have developed a new way of evaluating whether coastal marshes in Louisiana will be submerged by rising sea levels,” said Justin Lawrence, a program director in NSF’s Division of Earth Sciences. “The findings suggest that a large portion of coastal wetlands in Louisiana are vulnerable to present-day sea level rise.”

Lawrence said the research “may provide an early indication of what is to occur in coastal regions around the world later this century.”

The researchers used an unconventional method of measuring sea level change that integrated information from several data sources. They analyzed measurements of shallow land subsidence, or sinking, rates at sites across the Louisiana coast and combined these with published GPS-measurements of deeper subsidence rates.

Adding published satellite observations of the sea surface in the Gulf of Mexico, they were able to calculate how rapidly sea level is rising in comparison with how quickly coastal wetlands are sinking.

“The bottom line is that in assessing how dire the situation is in Louisiana, this new dataset is a huge step forward,” Törnqvist said.

The research was made possible thanks to publicly available data collected under the auspices of Louisiana’s Coastal Protection and Restoration Authority and the U.S. Geological Survey.