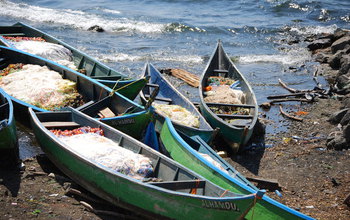 In fishing communities near Africa’s Lake Victoria, a new study has found that human illness exacerbates the decline of fisheries.

The research, supported by the National Science Foundation (NSF), suggests that poor human health may harm the environment rather than keep environmental exploitation in check.

“Studies have suggested that people will spend less time on their livelihoods when they are sick, but we didn’t see that as a trend in our study,” said Kathryn Fiorella, a Cornell University scientist who conducted the study while at the University of California, Berkeley. “We saw a shift toward more destructive fishing methods when people where sick.”

The results are published this week in the journal Proceedings of the National Academy of Sciences (PNAS).

NSF’s Dynamics of Coupled Natural and Human Systems (CNH) program, which funded the study, supports research into the complex relationships between people and the environment.

Understanding the links between human and environmental health is critical for the millions who cope with recurrent illness and rely directly on natural resources for sustenance.

“Healthy people, it turns out, are better for the environment,” CNH director Richard Yuretich said. “When you feel well, you can plan the tasks you need to accomplish more carefully. But when you’re sick, you often just want to get things done fast, with the result that you may be more wasteful. This project illustrates the complex relationships we have with the world around us.”

During the 1980s and 1990s, as commercial fishing grew around Lake Victoria, Nile perch stocks started to decline.

At the same time, the HIV epidemic was spreading throughout East Africa. As Lake Victoria’s fishing community grew sicker, the environmental exploitation of the fishery worsened.

To understand how illness alters fishing practices, Fiorella and UC Berkeley scientist Justin Brashares interviewed members of 303 households living along Lake Victoria’s shores over the course of a year. They collected data about household health and fishing habits and looked for trends during times of sickness and good health.

Among active fishers, the study found limited evidence that illness reduced fishing effort. Instead, fishers suffering from disease shifted the methods they used.

When sick, they were more likely to use methods that were illegal, destructive and concentrated in inshore areas, but that required less travel and energy. They were also less likely to fish using legal methods, including those that require physically demanding travel to deeper waters.

The study suggests that quality healthcare could have benefits beyond human populations, and it could help people manage their environment and the sustainability of its resources.

“We’re focused on trying to identify and illuminate the connections between a changing environment and its potential impacts on human economies, health and social systems,” Brashares said.