Infectious disease transmission in fish, mammals, other animals has implications for humans 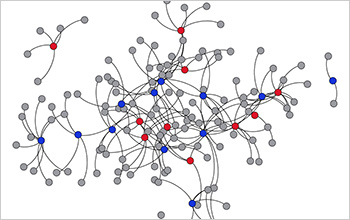 Related stories on the NSF, National Institutes of Health and U.S. Department of Agriculture’s Ecology and Evolution of Infectious Diseases (EEID) program are available online.

Scientists once thought that being part of a community would protect animal populations from infectious disease outbreaks, but now they’ve learned otherwise, according to a study published this week in the journal Proceedings of the National Academy of Sciences (PNAS).

The researchers found that the spread of infection is largely unaffected by the presence of communities.

An animal community is made up of the species of animals present and interacting in an ecosystem. For example, the animal community of Arizona’s Sonoran Desert includes snakes, spiders, birds of prey, desert tortoises and many additional species. In the sea, coral reef communities like those on Australia’s Great Barrier Reef include fish, sea turtles, dolphins, seabirds and others.

Georgetown University scientists Shweta Bansal and Pratha Sah, along with researchers at Pennsylvania State University and the U.S. Geological Survey, say their study has implications for disease control in humans and other animals.

“Although we know that social networks can be important for spreading diseases from one person to another, models are still needed that can predict how that spread will happen,” says Sam Scheiner, a director of the National Science Foundation’s (NSF) Ecology and Evolution of Infectious Diseases (EEID) program, which funded the study. “The results of these experiments have provided critical information that can be used to model disease spread in many species, including humans.”

“It’s an important advance that the analyses in this paper extended to marine species,” says Dave Garrison, an EEID program director in NSF’s Division of Ocean Sciences. “This is an area where we know disease is common, but information is still scarce.”

The scientists found that formation of communities is common across all animal populations, including social species such as dolphins, ants and chimpanzees, and solitary species like desert tortoises and Australian sleepy lizards.

The researchers discovered that animal societies that are highly subdivided — or fragmented — experience smaller but longer disease outbreaks because disease spread in these populations gets trapped in local communities.

Bansal says that scientists previously assumed that the presence of communities helped to reduce the spread of infectious diseases in social animal species while retaining the benefits of social living, such as increased mating opportunities, protection from predators and cooperative care of young.

“Our study rejects that hypothesis,” Bansal says. “Our work provides insights into a fundamental question of disease ecology.”