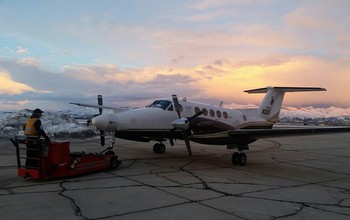 Results to offer insights into snowfall and water resource availability in the U.S. West

Can cloud seeding — dispersing particles into the air with the aim of increasing precipitation — increase snowfall?

This winter, a team of researchers funded by the National Science Foundation (NSF) conducted a cloud-seeding project in southwestern Idaho to try to answer that question.

Cloud seeding is a process by which silver iodide is released into the clouds from a plane or by ground-based generators. The silver iodide particles provide surfaces on which ice nuclei can form, leading to snow.

“I was surprised at the characteristics of the clouds in Idaho,” says Jeff French, a University of Wyoming (UW) atmospheric scientist and principal investigator of the project, called SNOWIE (Seeded and Natural Orographic Wintertime Clouds – the Idaho Experiment). “The air was surprisingly clean, and the clouds had very low concentrations of liquid drops.”

Those conditions affect which processes in clouds are important, how many droplets there are, how big they are, and ultimately how much snow falls, French says. This winter in Idaho, that was a lot.

The project also included scientists from the University of Colorado Boulder, University of Illinois at Urbana-Champaign, Boise State University, the National Center for Atmospheric Research (NCAR) and the Center for Severe Weather Research.

“SNOWIE is an important step in improving our understanding of cloud seeding and winter precipitation in general,” says Nick Anderson, program director in NSF’s Division of Atmospheric and Geospace Sciences, which funded the project. “These scientists have conducted a successful field campaign and now have a lot of data to analyze.”

The research was conducted in concert with the Boise-based Idaho Power Company, which obtains much of its electrical power through hydropower dams that rely on snowfall as a source of water.

Idaho Power funded the aircraft that released the silver iodide, while the King Air plane obtained measurements to understand the silver iodide’s effect, French says. The field work took place in and around the Payette Basin, located approximately 50 miles north of Boise. SNOWIE is considered the most comprehensive winter cloud-seeding study to date.

Idaho Power is interested in putting more snow on the ground in the mountains, which leads to more water in rivers and, ultimately, more power generation capability throughout the year.

Due to water shortages and droughts in some states and countries around the world, cloud seeding is seen as a potential way of increasing water supplies for communities and of irrigating crops. Water resource managers, hydropower companies and agricultural organizations typically pay for the process.

During SNOWIE, French says that the King Air operated in 24 intensive observation periods that each lasted from 4-8 hours. During those periods, researchers collected measurements in both seeded and unseeded clouds over a range of atmospheric conditions.

An NSF-supported Doppler on Wheels (DOW) fleet of radar dishes mounted on the backs of trucks was also involved.

“SNOWIE was very well-timed, happening during the snowiest winter in Idaho in decades,” says scientist Josh Wurman, director of the Center for Severe Weather Research, which manages the DOWs. “There was so much snow at the mountain sites that the DOWs are now marooned there until spring, when the huge snow drifts melt enough for them to be extracted.”

During the last week of the experiment, French says, the team had to cease cloud-seeding operations as a result of the heavy snow. Idaho Power’s policies require that cloud-seeding be suspended, due to potential flooding concerns, when an area exceeds 140 percent of maximum normal snowpack on the ground.

At the end of the field work, French was still surprised by the clean air in Boise; he had expected local industry to generate pollutants. The reason for the clean air, he says, may involve the way aerosols in surface air mix at higher altitudes.

“If there is no way for aerosols to get up to 14,000 feet, that air at 14,000 feet would be very clean,” French says. Which leads to questions, he says, “about how connected air is at the cloud level to air at the surface. I’m not sure. This took us all by surprise.”

Results from SNOWIE are expected to provide a new and important understanding of cold-season precipitation — both natural precipitation and that involving cloud seeding — that’s important for communities throughout the American West, a region that increasingly suffers from droughts and water shortages, French says.

Next up: SNOWIE researchers will conduct numerical modeling of winter cloud and precipitation processes using a supercomputer called Cheyenne at the NCAR-Wyoming Supercomputing Center. The models will simulate clouds and snow precipitation created in natural storms and with cloud seeding over the Payette Basin.