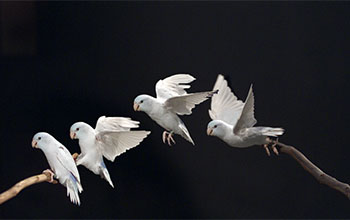 How often does research reveal not only how dinosaurs could have moved in the past, but how robots might move in the future?

If a Pacific parrotlet (Forpus coelestis) needs to get to a nearby branch, it uses its legs to jump. If a target falls just outside of its jump range, however, it can add a “proto-wingbeat,” a small flapping motion that allows it to travel farther without using as much energy as full flight.

That method of “long jumping” by using a combination of wings and legs may have been how the parrotlets’ distant ancestors — dinosaurs — moved through trees to forage, according to a Stanford University research team supported by the National Science Foundation’s (NSF) Biological Sciences Directorate.

Researchers Diana D. Chin and David Lentink write in a new Science Advances paper that with a single proto-wingbeat, a bird-like dinosaur like Archaeopteryx or Microraptor could jump 20 percent farther than if it had just used its legs. The boost would only cost the proto-flier the amount of energy needed to support 30 percent of its bodyweight. That meant they could save more energy for other activities necessary for survival and reproduction — and gain an edge over competitors.

The paper focused on more than the distant past, however. Another key finding of the study was that parrotlets select takeoff angles that help them reduce the energy they need to jump and fly. Depending on the distance or incline, the parrotlets will change that angle.

Conserving energy is important for living beings and also for bimodal robots that have legs and wings. When traversing cluttered environments, these robots could optimize their takeoff angles like the parrotlets and use the conserved energy for other purposes, including longer operations.

To measure the forces parrotlets generate using their legs and wings, the researchers equipped the birds’ perches with force sensors and developed a new flight chamber that measures the aerodynamic forces of their wings. Measuring the forces exerted on the perch is relatively standard. To measure how the birds’ wings generate aerodynamic lift forces, the researchers outfitted the bottom floor and ceiling of the flight chamber with sensors. This new method, an innovation from Lentink’s lab, allowed the researchers to measure the pressure forces induced by the wing’s lift. The researchers found the leg and wing forces combined allow parrotlets to forage efficiently by making wing-assisted long jumps.

In future work, the research team plans to further study these short flights using a new method of recording bird flight in 3-D developed with support from NSF and the U.S. Army Research Laboratory. The method involves projecting customized patterns of light on birds as they fly. The projected patterns deform on the birds’ bodies, and a high-speed camera catches the action. Information from the footage is then used to create a 3-D reconstruction of how the birds’ bodies move.