World Environment Day: What does the future hold for Earth’s ecosystems? 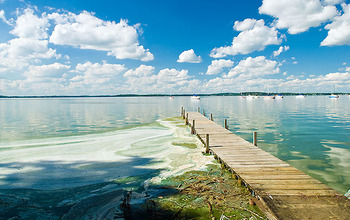 From coast to coast, signs of pressure — and of hope

Any science may be likened to a river. It has its obscure and unpretentious beginning; its quiet stretches as well as its rapids; its periods of drought as well as of fullness. It gathers momentum with the work of many investigators and as it is fed by other streams of thought.
– Carl Swanson, Biologist

How healthy will Earth’s ecosystems be in 2027, 2067 and beyond? It’s an important question to ask, especially on World Environment Day, June 5.

“LTER research provides a long time period of study so relationships among ecological components can be understood, ecological changes can be documented, and strategies to react to these changes developed and tested,” Rick Murray, director of NSF’s Division of Ocean Sciences, said at the mini-symposium.

In deserts and lakes, along coasts, and in northern forests and arctic tundra, researchers at NSF LTER sites study the nature of ecosystem change, along the way discovering which factors lead to ecosystem recovery — and which can lead to irreversible loss.

While ecosystems from coast to coast are showing signs of pressure, there’s hope amid the concerns: long-term research demonstrates that ecosystems benefit from protection and restoration efforts based in good science.

“As ecosystems are subjected to increasing environmental changes, we need to understand general scientific principles to predict how these systems will react — why some are resilient and others not as much,” Paula Mabee, director of NSF’s Division of Environmental Biology, said at the mini-symposium. “The science NSF funds at LTER sites gives us exactly this knowledge.”

“We rely on ecosystems for many services that are critical to human health and well-being, yet these systems are increasingly changing in fundamental and unpredictable ways,” said Peter Groffman of the Baltimore Ecosystem Study and Hubbard Brook LTER sites and chair of the LTER Science Council, a group that coordinates research activities in the LTER Network. “There is a critical need to understand the nature of these changes so we can predict, prevent, mitigate and adapt to them.”

The LTER Network, Groffman stated, is doing just that. With some 2,300 investigators, more than 5,900 public datasets, and 16,000 published journal articles, LTER scientists use long-term research to address some of the most difficult questions in fields such as ecology, hydrology and oceanography.

How U.S. residents tend their lawns — those icons of suburban and urban America — offers an example.

“Lawns not only cover a larger extent of land than any other irrigated ‘crop’ in the U.S., but are on track to expand in the coming decades,” Groffman said. Whether, and how much, property owners treat lawns with fertilizers containing nitrogen and phosphorus is important, he said. When lawn runoff containing these elements flows into rivers, ultimately reaching lakes or the sea, it often produces toxic blooms of algae and degrades water quality.

“The future of many aquatic ecosystems is rooted right in our backyards,” Groffman said.

“Ecosystem change is inevitable,” said Brandon Bestelmeyer of the Jornada LTER site in New Mexico. “Our challenge is to direct that change along the most desirable path available.”

Drylands, including those at Jornada, evoke images of desolate, scorched, uninhabitable deserts. But arid and semi-arid lands like the Chihuahuan Desert, where the Jornada site is located, are complex ecosystems made up of grasses, shrubs, agricultural fields and urban-dwelling plants and animals, including people.

Many dryland landscapes have gone through marked changes in vegetation structure and ecosystem processes over the past 150 years. Explanations for these changes include overgrazing by livestock, drought, fewer natural fires, changes in atmospheric chemistry, and changes in small mammal populations.

“We need to look toward what will come next,” said Bestelmeyer, “and understand what actions we can take now to improve ecosystem services for current and future stakeholders.”

Fire in a warming Arctic

“Arctic ecosystems are undergoing rapid and surprising changes,” said Michelle Mack of Alaska’s Bonanza Creek and Arctic LTER sites. “Our job is to try to understand when ecosystems will recover, and when they will shift to new states.”

Mack studies ecosystem resilience to the wildfires that have recently swept through parts of the Bonanza Creek and Arctic sites.

“With warmer and drier weather in the Arctic, wildfires are becoming more frequent,” Mack said. “At Bonanza Creek, fires have been common for the past 10,000 years, but fires at the Arctic site are a new disturbance.”

Among the conclusions: in boreal forests like those at Bonanza Creek, “severe fires triggered a shift from coniferous to deciduous tree dominance,” said Mack.

In the Arctic site’s tundra, deep soils were protected from the effects of burning. The intact vegetation led to rapid ecosystem recovery after the fire.

“The fires were unique opportunities to study these events,” Mack said.

Where to store carbon?

“We live in a time of rapid ecosystem change,” stated Karen McGlathery of the Virginia Coast Reserve LTER site. “Our challenge is to understand what drives these changes and their consequences so we can make decisions that lead to the most desirable future.”

Seagrasses, for example, are a vital part of the solution to high atmospheric carbon dioxide levels and resulting climate change, researchers at the Virginia Coast Reserve site have found. Like all plants, seagrasses “breathe out” oxygen and “breathe in” carbon dioxide.

“A remarkable thing about seagrass meadows is that they can effectively and rapidly store that carbon,” McGlathery said.

Virginia Coast Reserve scientists are working to build back these “carbon pools” through seagrass restoration efforts.

“Doing this where ocean temperatures are less extreme [warm] makes these meadows more resilient to climate change in the future,” McGlathery said.

Acid rain: Scourge of the past?

“Ecosystems are complex and dynamic,” stated Charles Driscoll of the Hubbard Brook LTER site in New Hampshire. “We hope to understand, project and mitigate their responses to our activities.”

Take, for example, acid rain. It began in the 1950s when Midwest coal plants spewed sulfur dioxide and nitrogen oxides into the air, turning clouds — and rain and snow — acidic.

As acid rain fell, it leached calcium and magnesium from soils and robbed plants of important nutrients. New England’s sugar maples were among the trees affected.

With stricter air quality regulations imposed in 1970 and strengthened in 1990, acid rain lessened, but its legacy remains, Driscoll said.

Today, acid rain is greatly reduced, Driscoll said, approaching levels likely not seen for the past 100 years. However, the soil calcium sugar maples depend on has been slow to respond.

“So acid rain will be with us for some time, and sugar maples are unlikely to recover anytime soon,” Driscoll said.

On the good news side, he said, “there’s evidence that red spruce trees, and some animals in lakes and rivers, are among the species that are recovering.”

“While humans impart widely publicized change to ecosystems, people remain unsure or unaware of how their individual footprints on the planet can impact the quality of life for themselves or someone they have never met,” said Christopher Kucharik of the North Temperate Lakes LTER site in Wisconsin.

“In particular, how do climate, social-ecological interactions, land use and cover, and ecological processes act in concert to shape the past, present, and future of lake districts?” Kucharik asked.

For answers, scientists are looking to Wisconsin’s Yahara watershed. The Yahara, which includes the twin lakes of Mendota and Monona in the city of Madison, provides the region with ecosystem services such as water quality and flood protection.

Stresses on the Yahara watershed are typical of many agricultural landscapes.

“Nitrogen from agriculture contaminates groundwater, and phosphorus from non-point, diffuse runoff is greater than that in pre-farming days,” Kucharik said. Phosphorus pollution from fertilizer and other sources, he believes, is fast becoming the Yahara’s public enemy number one.

“But we have the opportunity to change agriculture and urban management practices while the Yahara watershed is still relatively healthy,” Kucharik said. “Let’s not wait until it’s beyond repair.”