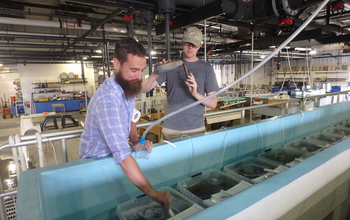 Find related stories on the NSF, National Institutes of Health and U.S. Department of Agriculture’s Ecology and Evolution of Infectious Diseases (EEID) program

It’s World Oceans Day this week, but the state of the seas may not be cause for celebration. Among other maladies in the marine world, millions of sea stars native to the Pacific coast of North America have succumbed to a mysterious disease. Limbs pull away from the sea stars’ bodies and organs extrude through their skin.

The first symptom is white lesions that appear on the surface of the starfish and spread rapidly, followed by the decay of tissue around the lesions. Eventually the sea stars’ bodies begin to break down. The starfish may die within a few days.

The disease is called sea star-associated densovirus (SSaDV), and researchers say it could trigger an ecological upheaval under the waves.

Infectious diseases such as SSaDV are unfortunately not new in the ocean, write biologists Kevin Lafferty of the U.S. Geological Survey and Eileen Hofmann of Old Dominion University in a special issue of the journal Philosophical Transactions of the Royal Society B. It’s the first time an entire journal issue has been devoted to marine diseases, says Hofmann.

Marine diseases “have been ignored for a very long time, but we’re finding out that they have enormous economic costs,” Lafferty and Hofmann write in their introduction.

The alarm over SSaDV, the scientists say, recalls disease events that have affected other marine species.

“Marine prawn and fish aquaculture, for example, create perfect conditions for disease transmission,” Hofmann and Lafferty say, “such that disease costs the global economy billions of dollars, and has implications for food security as wild fisheries are replaced by aquaculture.”

“We’re losing species that other things depend on to keep the whole food web operational,” adds Hofmann. “Humans are forfeiting ecosystem services because of marine diseases.”

Those ecosystem services include fish and shellfish that are safe to eat, and clean waters provided by filter-feeders like oysters, which have succumbed to marine diseases such as Dermo.

Hofmann’s studies of marine infectious diseases are funded by the National Science Foundation (NSF), National Institutes of Health and U.S. Department of Agriculture Ecology and Evolution of Infectious Diseases (EEID) program, which supports research on the transmission dynamics of infectious diseases.

“The role of marine disease in the oceans is poorly known,” says Mike Sieracki, an NSF EEID program director. “Hofmann’s work improves our understanding of how disease influences marine ecosystems, which is important for managing commercial fisheries.”

To marine scientists, sudden mass mortalities imply an unbalanced system or an introduced disease-causing organism or both, often with effects on people.

For example, marine diseases can compete with humans for seafood, according to Lafferty and Hofmann. Take abalone withering syndrome, which heralded the California abalone fishery’s demise.

To assess the state of marine disease research and suggest new frameworks for studying and managing these diseases, an EEID-funded Research Coordination Network led by Drew Harvell of Cornell University brings together scientists with expertise in pathology, ecology, fisheries biology, oceanography, conservation biology, economics, and communication and policy. Each discipline offers a different and important perspective, say Lafferty and Hofmann.

Fisheries biologists focus on yield, while economists consider human behavior in the marketplace, and ecologists study parasites in a natural context. Oceanographers investigate disease transmission and connectivity, and conservation biologists ask whether natural systems are at risk. Communications experts study what the public cares about. Finally, policy experts evaluate whether existing regulations are enough to reduce the spread of disease.

“All these specialties are needed to address the important issues of identifying, managing and understanding the impacts of marine diseases,” write Lafferty and Hofmann.

For her part, Hofmann is studying the effects of Dermo on Eastern oysters. Dermo cuts a swath through oyster populations, leaving few survivors.

Hofmann and colleagues like Eric Powell of the University of Southern Mississippi are developing a marine disease transmission model based on Dermo that’s applicable to bivalves, gastropods, sea urchins and corals.

The model, which works in environments from estuaries to coral reefs, shows that understanding interactions between these species and the waters above are key to solving the problem of marine diseases.

Oysters, for example, act as strainers, filter-feeding bits of algae and other suspended particles, such as disease-causing microbes, for food. High densities of oysters and other filter-feeders like mussels and sea squirts compete for food, including waterborne pathogens.

Insights from the modeling study, Hofmann says, “can inform management responses to marine diseases. Healthy populations of filter-feeders are critical to the long-term sustainability of marine ecosystems.”

On World Oceans Day or anytime throughout the year, it’s our responsibility to figure out where marine diseases are coming from, Hofmann says, and whether we’re ultimately playing a role.