World Oceans Day: How do snook survive cold spells in Everglades waters? By heading for the depths 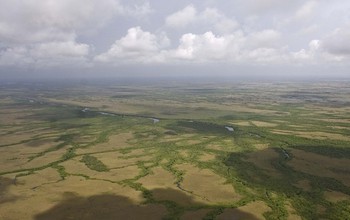 When a cold spell strikes the tropics, an animal’s location at any given moment could be the difference between life and death.

That was the case with a Florida Everglades fish called a common snook when a cold snap struck in 2010, scientists report today — World Oceans Day — in the journal Global Change Biology.

“If we look at the average temperatures throughout the entire ecosystem during the cold spell, no snook should have survived,” said Ross Boucek, a biologist with Bonefish & Tarpon Trust who conducted the study while at Florida International University (FIU). “But if you zoom in on temperatures in different habitats, you see certain features that allowed a few habitats to stay warm enough for some fish to make it out alive.”

Deeper water helps keep water temperature constant; those locations are where the snook waited out the cold.

At the top of an estuary like the Everglades’ Shark River, where researchers performed their study, habitats are shallower with less salt. At the bottom, where habitats are deeper with saltier water, the colder surface water is less likely to mix in.

Snook exposure to potentially lethal cold anomalies is governed not only by fish behavior, but by cold and warm water mixing due to winds, river flow, tides and water depth, according to Tom Torgersen, program director for the National Science Foundation’s (NSF) Water Sustainability and Climate program, which supported the research at NSF’s Florida Coastal Everglades Long-Term Ecological Research (LTER) site.

The site is one of 28 such NSF LTER sites in ecosystems from wetlands to coral reefs, grasslands to deserts.

“The effect on snook of any single extreme event should be viewed in terms of the physical conditions in which it happened, as well as the biological processes that affect snook distribution,” said Torgersen.

According to Jennifer Rehage, an FIU ecologist, if researchers understand what keeps water temperatures warmer, and how and why snook seek refuge in those habitats, resource managers can understand the snooks’ vulnerability and manage the fish population accordingly.

Florida Coastal Everglades LTER monitoring networks provided the scientists with long-term data on environmental conditions. The scientists outfitted more than 100 snook with acoustic transmitters, following their movements throughout the Everglades.

“Sudden changes in water temperature due to cold snaps may have lethal effects on many economically important species of fish and other marine creatures,” said NSF LTER program director David Garrison. “By understanding what drives species distribution patterns in these circumstances, fisheries management plans can be adjusted accordingly.”