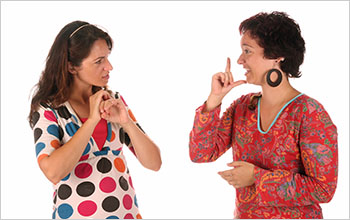 From an outside perspective, understanding a spoken language versus a signed language seems like it might involve entirely different brain processes. One process involves your ears and the other your eyes, and scientists have long known that different parts of the brain process these different sensory inputs.

To scientists at the University of Chicago interested in the role rhythm plays in how humans understand language, the differences between these inputs provided an opportunity for experimentation. The resulting study published in the Proceedings of the National Academy of Sciences helps explain that rhythm is important for processing language whether spoken or signed.

But even after researchers identified entrainment, understanding the role of rhythm in language comprehension remained difficult. Neural activity changes when a person is listening to spoken language — but the brain also locks onto random, meaningless bursts of sound in a very similar way and at a similar frequency.

That’s where the University of Chicago team saw an experimental opportunity involving sign language. While the natural rhythms in spoken language are similar to what might be considered the preferred frequency for the auditory cortex, this is not true for sign language and the visual cortex. The rhythms from the hand movements in ASL are substantially slower than that of spoken language.

The brain activity rhythms in the visual cortex followed the rhythms of sign language. Importantly, the researchers observed entrainment at the low frequencies that carry meaningful information in sign language, not at the high frequencies usually seen in visual activity.

“By looking at sign, we’ve learned something about how the brain processes language more generally,” said principal investigator Daniel Casasanto, Professor of Psychology at the University of Chicago. “We’ve solved a mystery we couldn’t crack by studying speech alone.”

While the ASL-fluent and non-signer groups demonstrated entrainment, it was stronger in the frontal cortex for ASL-fluent participants, compared to non-signers. The frontal cortex is the area of the brain that controls cognitive skills. The authors postulate that frontal entrainment may be stronger in the fluent signers because they are more able to predict the movements involved and therefore more able to predict and entrain to the rhythms they see.

“This study highlights the importance of rhythm to processing language, even when it is visual. Studies like this are core to the National Science Foundation’s Understanding the Brain Initiative, which seeks to understand the brain in action and in context,” said Betty Tuller, a program manager for NSF’s Perception, Action, and Cognition Program. “Knowledge of the fundamentals of how the brain processes language has the potential to improve how we educate children, treat language disorders, train military personnel, and may have implications for the study of learning and memory.”

#1144082 Graduate Research Fellowship Program (GRFP)
#1257101 How motor action shapes emotion in the brain
#0116293 MRI: Acquisition of Instrumentation to Measure the Time-Course and Distribution of Cortical Activity in Perceptual Cognitive, and Social Psychological Processing