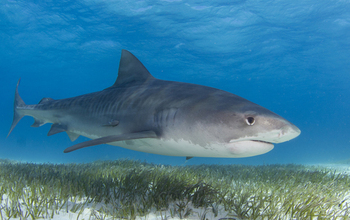 Sharks, marine scientists say, are often misunderstood, described as ravenous man-eaters. But researchers have discovered that sharks are critically important to the health of the world’s oceans.

For more than two decades, marine scientist Michael Heithaus of Florida International University (FIU) has been immersed in the world of sharks and other predators that help the sea maintain a delicately balanced food web. Heithaus’ work is focused on predators in the waters of South Florida — and across the globe in Shark Bay, Australia.

In 2011, some 15 years into a long-term study of the ecological importance of tiger sharks in Shark Bay, a heat wave struck the region. Warm ocean waters caused the widespread loss of seagrasses, a main food source for dugongs (sea cows) and other species that are the sharks’ prey.

Now Shark Bay’s seagrasses are struggling to bounce back from the heat wave. They have some unexpected help. Sharks, it turns out, are one of the seagrasses’ best allies in the fight to survive.

Without enough sharks, the grazers could devour the underwater grass beds, Heithaus has found.

It’s all about how predators and prey interact, according to Heithaus. “Just the fear of sharks can be enough, in many cases, to keep a marine ecosystem healthy and able to respond to stresses.”

“This research points out the importance of comprehensive studies of ecosystems,” said David Garrison, a program director in the National Science Foundation’s (NSF) Division of Ocean Sciences, which funded the study. “Without such work, we might not realize the important role sharks play in the recovery and health of seagrasses.”

Heithaus and marine scientist James Fourqurean, also of FIU, are conducting research to assess how climate disturbances and the reduction of shark populations — a quarter of all shark species are threatened with extinction — change the oceans.

Although seagrass meadows occupy less than 0.2 percent of the world’s oceans, they are responsible for more than 10 percent of all carbon buried annually in the sea.

Per unit area, seagrass meadows can store up to twice as much carbon as the world’s temperate and tropical forests, said Fourqurean. Coastal seagrass beds hold up to 83,000 metric tons of carbon per square kilometer, mostly in the soils beneath them.

As a comparison, a typical terrestrial forest stores about 30,000 metric tons per square kilometer, mostly in the form of wood.

The same could be said of the sharks, Heithaus said, that in effect guard those seagrasses.