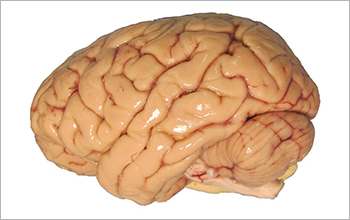 As a part of their research to understand the evolution of the human brain and how it differs from those of other primates, scientists from Kent State University discovered proteins associated with Alzheimer’s disease — believed to be unique to humans — in a sample of brains of aged chimpanzees.

Alzheimer’s is a clinical disorder partially confirmed at autopsy by the co-occurrence in the brain of two proteins: amyloid beta, and a second called tau.

In a paper just published in Neurobiology of Aging, the scientists say that the detection of both amyloid beta and tau in aged chimps suggests that Alzheimer’s-like pathology is not limited to the human brain. The research was partially supported by the National Science Foundation’s (NSF) directorate for Social, Behavioral and Economic Sciences.

It has been suggested that humans are uniquely susceptible to Alzheimer’s, potentially because of genetic differences from other primates, changes to the human brain during evolution, and longer lifespans.

The researchers found significant evidence of amyloid beta and tau lesions in the same brain regions affected by Alzheimer’s in humans.

While there have been age-related studies of great apes, the profound memory impairment found in Alzheimer’s patients has not yet been demonstrated in nonhuman primates. Along with autopsy results, a diagnosis of Alzheimer’s requires data from behavioral and cognitive testing to determine whether amyloid beta and tau lesions are associated with cognitive decline. At present, there are no studies that consider both cognitive data and autopsy results from the same apes to distinguish between normal and pathologic aging processes.

But the identification in the aged chimpanzees of amyloid beta and tau lesions, hallmarks of Alzheimer’s diagnosis, is a significant advance in understanding the brain and Alzheimer’s.

#1316829 Comparative Analysis of a Critical Brain Structure: The Basal Ganglia