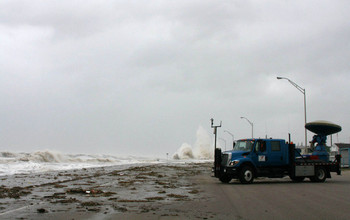 Northbound Interstate 37 was jammed with cars, trucks, trailers and boats. Stores and gas stations were boarded up. Corpus Christi was shutting down. “People just grabbed whatever they could carry and went,” said atmospheric scientist Josh Wurman, director of the Center for Severe Weather Research (CSWR) in Boulder, Colorado.

Wurman should know. He and scientist Karen Kosiba, also of CSWR, were running the wrong way, heading for ground zero, where Harvey’s fury would roar onshore. They weren’t alone. A National Science Foundation (NSF) Doppler-on-Wheels (DOW) was with them.

The DOW looks more like the dish of a radio telescope than a sophisticated weather instrument. It’s mounted on the back of a flatbed truck. With DOW onboard, the truck becomes an odd configuration of generator, equipment and operator cabin.

Ungainly as it may appear, it’s ideally suited to providing detailed information on the inner workings of hurricanes, said Wurman. The DOW uses Doppler radar to produce velocity data about objects (such as hurricanes, tornadoes and other severe storms) from a distance.

“The measurements made by the Doppler on Wheels are revealing new levels of detail about small-scale structures in storms like Harvey,” said Linnea Avallone, a program director in NSF’s Division of Atmospheric and Geospace Sciences. “These observations are leading to an improved ability to forecast winds and precipitation in major hurricanes.”

In the midst of Harvey, Wurman and Kosiba set up the DOW and several weather pods — small, stick-shaped instruments — at an airport near Rockport, Texas. The scientists’ goal: to map the hurricane’s winds in detail. “The pods were deployed at locations exposed to the wind, including on top of a tall bridge,” said Wurman.

The team then hunkered down in the DOW for the night. To observe the most intense phenomena, “we put ourselves in the path of the worst,” Wurman said. And “the worst” happened.

Harvey’s eye moved onshore overnight, directly over the DOW. “Conditions were worse than any we had yet experienced,” said Wurman. “The DOW anemometer measured wind gusts of 145 miles-per-hour, the strongest observed in Harvey.”

Buildings at the airport were destroyed. Debris flew through the air at more than 100 miles-per-hour. “Cars were tossed about,” Wurman said. “The pods on the bridge were blown away.”

Small wind vortices swirled around in the hurricane’s eye. “Although the wind vortices were barely visible on more distant radars,” said Kosiba, “they were mapped with amazing precision by the DOW.” The smaller, tornado-like vortices caused extreme and damaging winds, the scientists found.

A new understanding of how hurricane eyewall vortices behave and how they fuel the most intense winds will help future predictions of hurricane damage.

“Using the DOW, we discovered how these vortices and ‘boundary layer streaks’ [winds along the hurricane’s edge] mix energy from the ocean into these storms,” said Wurman. “This finding will enable a better understanding of hurricane intensification.”

The team is now analyzing the trove of data collected during Harvey — and getting ready to go again.

The DOW’s next stop? Hurricane Irma.