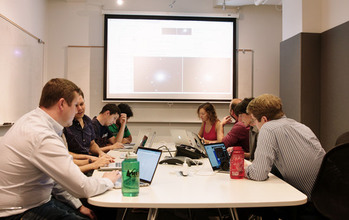 The recent observation of gravitational waves and light produced by colliding neutron stars didn’t just provide scientists with a transformative look at a rare cosmic event — it provided an important clue about the origins of some of the elements that surround us.

Less than two years ago, scientists from the Laser Interferometer Gravitational-Wave Observatory (LIGO), which the National Science Foundation (NSF) supports, marked one of the most significant moments in modern science: the detection of gravitational waves, ripples in the fabric of space-time resulting from the universe’s most violent phenomena. Just a few days ago, LIGO and the Europe-based Virgo detector announced the detection of two neutron stars colliding. The smallest, densest stars known to exist, neutron stars are smaller than cities like Los Angeles, and result from the collapse of massive stars. When two neutron stars spiral towards each other and eventually collide, the subsequent explosion emits not only gravitational waves, but also light that can be captured by telescopes.

Within hours, the GROWTH (Global Relay of Observatories Watching Transients Happen) team of astronomers had mobilized multiple ground- and space-based observatories to search for an electromagnetic (EM) counterpart associated with this event, dubbed GW170817. GROWTH, an NSF-funded Partnership for International Research and Education (PIRE) project led by Caltech, which is also an operator of LIGO, supports an international collaborative network of telescopes and scientists.

In a trio of papers published in the journal Science earlier this week, the GROWTH team presented their unique multi-wavelength dataset from 18 telescopes in six continents, along with a novel, concordant physical model that can explain the observations. The infrared light captured by GROWTH astronomers with the NSF-funded Gemini and Cerro Tololo Inter-American observatories co-located in Chile confirmed that neutron star mergers are the cosmic mines of heavy elements.

Decades ago, scientists established that chemical elements up to iron are produced in the Big Bang or in the cores of stars that go supernova. Theorists have long proposed that chemical elements heavier than iron, such as gold, platinum and uranium, are created when neutron stars merge. However, until now, they have had little observational evidence to support these theories, leaving the origin of half of the elements in the periodic table unexplained.

The new results by the GROWTH team now confirm that such elements are indeed forged in the aftermath of neutron star collisions.

“This was a majestic scientific milestone,” Kasliwal says. “But it came with surprises as well. No existing model could explain consistently what we saw in different wavelengths. So, it was time to get more creative.”

Since the 1960s, astronomers have observed extremely energetic flashes of light, brighter than anything else in the universe, called gamma-ray bursts. They proposed these bursts, which are shorter than 2 seconds, were the result of neutron star mergers. However, the brightness of the flash from GW170817 was four orders of magnitude too weak to be a classical short gamma-ray burst.

To explain the data across the electromagnetic spectrum, the GROWTH team proposed a so-called cocoon model. When a jet of energy and material resulting from a collision is launched, it accelerates the material engulfing it to mildly relativistic speeds and forms a pressurized wide-angle cocoon. When the cocoon breaks out of the surrounding material, a weak, short burst of gamma rays is observed. When the cocoon’s forward shock interacts with the interstellar medium, a delayed onset of radio and X-ray emission is detectable. The material accelerated in the cocoon initially gives off a fast, blue ultra-violet emission, followed by a slow, infrared emission caused by the radioactive decay of heavy elements. Thus, the cocoon model explains the panchromatic dataset and successfully demonstrates that merging neutron stars are the long-sought production sites where heavy elements are forged in the Milky Way.

Additionally, the cocoon model forecasts a high success rate of observing gravitational waves from detectors such as LIGO and Virgo, and electromagnetic radiation from ground- and space-based telescopes.