Alligators, rulers of the swamps, link marine and freshwater ecosystems 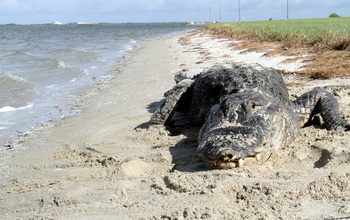 ‘Gators follow the tides to find food, ferrying nutrients as they go

The sophistication of radio transmitters has moved well beyond the days of walkie-talkies. Now transmitters similar to those that track space mission orbiters are being used here on Earth to follow alligators, rulers of the swamps. The transmitters are allowing scientists to learn about ‘gator movements between freshwater and saltwater ecosystems.

Ecologists at the National Science Foundation (NSF) Georgia Coastal Ecosystems LTER site, one of 28 NSF LTER sites in the U.S. and around the world, used radio or GPS transmitters to track alligators’ wanderings for as long as four months, placing the instruments on the backs of the ‘gators.

The scientists discovered that the amount of time alligators spend in fresh or salt water depends on factors such as tide range and water temperature.

Unlike their relatives the crocodiles, alligators don’t have salt glands and therefore can’t survive full-time in salt water. They move back and forth between marine and freshwater ecosystems to rebalance their salt levels — and to feed.

The American alligator is the most abundant large predator in aquatic ecosystems along the U.S. Southeast coastal plain, said ecologist James Nifong of Kansas State University.

“Historically, alligators have been considered a freshwater species due to their lack of salt-secreting glands,” said Nifong. “These glands allow their cousins, the crocodiles, to excrete excess salt from marine environments.”

As a result, alligators’ use of salty environments such as near-shore marine areas, mangrove swamps and salt marshes was, until recently, thought of as unusual behavior and of little ecological importance.

Since the late 1800s, however, alligators have often been spotted in salty environments in Southeast coastal areas. “With widespread observations of this behavior and the knowledge that alligators play important ecological roles,” said Nifong, “researchers began to question the possible importance of cross-ecosystem alligator movements between freshwater and saltwater environments.”

Nifong and Brian Silliman of Duke University recently published the results of a study of marine habitat use by alligators in coastal Georgia in the journal Hydrobiologia.

“Scientists often focus studies on organisms that spend a large part of their time in a habitat, and pay less attention to transient visitors,” said ecologist Merryl Alber of the University of Georgia, principal investigator of the NSF Georgia Coastal Ecosystems LTER site.

“But Nifong and Silliman found that freshwater American alligators can and do visit marine areas, and that they play an important role in coastal ecosystems like salt marshes,” said Alber. “The results demonstrate the interconnectedness of habitats, and show the value of taking a broad view in doing research.”

By traveling from one ecosystem to another, alligators ferry nutrients like nitrogen and phosphorus from place to place in the food they eat and excrete.

“Although it’s known that resources are often exchanged between adjacent ecosystems, what controls the transfer of those resources is a question,” said David Garrison, chair of the NSF LTER Working Group. “This research reveals the relationship between freshwater alligators and salt marsh ecosystems.”

Added Nifong, “It’s important to understand the connections between freshwater and saltwater ecosystems so we can better predict the consequences of changes in these environments.”

By tracking ‘gators, the ecologists determined that alligators remain in marine habitats for longer periods around spring tides — tides just after a full or new moon, when there’s the greatest difference between high and low water. (In contrast, neap tides occur just after the first or third quarters of the moon, when there is the least change between high and low water.)

Other factors also contribute to ‘gator patterns of movement, such as temperature and precipitation, which are linked with their need to balance salt intake.

By understanding the factors that contribute to alligators’ meanderings, environmental managers can gain a better understanding of alligators’ place in coastal ecosystems, state Nifong and Silliman in their paper.

If you’re visiting your favorite spot along the Southeast coast, keep an eye out for alligators not only in freshwater wetlands, but in salt marshes along beaches — especially just after a full moon, when the gators’ jaws are open and at the ready for unsuspecting prey.