Song of the red rock arches 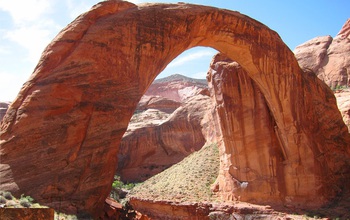 It starts out as a rumble, like something heard underwater. It rises and falls in waves that pass one after another. But it couldn’t be farther from the sea.

This is what the red rock arches of the Colorado Plateau sound like. Listen to them at this website.

Seismic vibrations that are almost imperceptible to human ears ripple through the rocks. Geoscientist Jeff Moore of the University of Utah uses recordings of the vibrations to study the arches’ structural stability.

Moore is learning where the seismic vibrations come from and how they affect the arches.

Artist Jacob Kirkegaard layers Moore’s recordings with sounds of the arches’ environment to show that the rocks are a vibrant part of their ecosystem.

“These rock movements are happening every second of every day, but are too small for us to see or feel,” Moore said. “Hearing the natural hum of the arches gives them a ‘voice’ where, in effect, they convey their state of health and their responses to all manner of forces.”

Moore’s National Science Foundation (NSF)-funded study of Utah’s Rainbow Bridge revealed that seismic sources as close as Lake Powell (on the border of Utah and Arizona) and as far away as Oklahoma caused vibrations in the bridge.

The scientist characterized how waves resonate throughout the bridge, causing small movements that, when exaggerated, look like wobbles on a plate of gelatin.

“These gorgeous rock arches appear to be stationary, but they’re actually in constant motion in response to wind and other environmental forces,” said Justin Lawrence, a program director in NSF’s Division of Earth Sciences. “The arches’ vibrations can also be affected by people.”

For example, Moore’s team found that a helicopter flying close to an arch in Utah’s Bryce Canyon caused the arch to vibrate with an amplitude one hundred times greater than normal.

“This research has important implications for the conservation and management of our nation’s natural resources,” said Lawrence, “especially related to natural hazards such as earthquakes as well as the impacts of human visitation.”

Kirkegaard got involved with the project when Moore began sharing his seismic recordings. Now the artist has traveled to Utah and Arizona with the research team to capture the sounds of wind, streams and wildlife near the majestic rock features. The resulting audio piece is called “Transmission.”

Moore says that experiencing the landscape this way is fascinating. “It’s different from anything I’ve ever done,” he said. “It’s led me to try to communicate the ‘hidden voice’ of the arches, which our data allow us to decipher.”

Kirkegaard has created an installation of “Transmission” at Hood Museum in New Hampshire, placing speakers at the bottom and top of a concrete atrium. The lower speakers broadcast low-frequency rumbling waves inside the arches, while the upper speakers play sounds at the arches’ surface. The exhibit suggests a connection between deep rock and the life that lives on and around it.

Moore continues to measure and monitor the resonance of the arches over time, and to search for signals indicating permanent damage.

“Humans aren’t equipped with the senses to experience these subtle movements, so it’s important that we measure them — and share them to help people experience the dynamics of geology.”