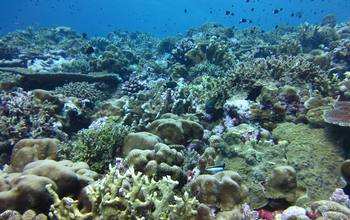 How corals grow is the key

The rising acidity of the oceans threatens coral reefs by making it harder for corals to build their skeletons. A new study details how ocean acidification affects coral skeletons, enabling scientists to predict more precisely where corals will be most vulnerable.

The results were published this week in the journal Proceedings of the National Academy of Sciences.

How much acidification is too much?

“Our research incorporates the nuances of coral skeletal growth, enabling more precise projections of how, where and by how much ocean acidification will affect tropical reef-building corals,” said Nathaniel Mollica, lead author of the study and affiliated with the MIT-WHOI Joint Program in Oceanography.

The scientists developed a numerical model simulating the skeletal growth mechanism and coupled it with projected changes in ocean acidity.

“This important study determined the specific way a coral species is affected by ocean acidification and modeled the effect of future environmental conditions,” said David Garrison, director of NSF’s biological oceanography program, which funded the research.

It all comes down to aragonite

Coral skeletons are made of aragonite, a form of calcium carbonate. Corals grow their skeletons upward by stacking bundles of aragonite crystals on top of each other.

They thicken the bundles with additional crystals, strengthening the skeletons and helping them withstand breakage from currents, waves, storms and the boring and biting of worms, molluscs, and parrotfish.

Rising levels of carbon dioxide in the atmosphere, mostly from burning fossil fuels, cause ocean acidification. When carbon dioxide is absorbed by seawater, it’s harder for corals to accrete their aragonite skeletons.

Laboratory experiments and field studies have been ambiguous, showing clear impacts of ocean acidification on skeletal growth in some cases but not in others. The new research suggests this inconsistency reflects the complexity of coral skeleton growth.

To test this theory, the scientists took cores of skeletons from Porites, a common type of reef-building coral, in four locations: Palau; Dongsha Atoll in the South China Sea; Green Island off Taiwan; and Saboga in Panama.

Seawater conditions spanned a range of acidity levels. The researchers used a 3-D computerized tomography (CT) scanner to image the skeletal cores, which reveal annual growth bands, much like rings on a tree.

The scientists were able to discern and quantify the upward and thickening components of the coral growth. The analysis revealed that the skeletons of corals in more acidic waters were significantly thinner.

The researchers examined the coral growth process and showed that the corals can’t produce as much aragonite to thicken their skeletons.

The corals continue to invest in upward growth, but thickening suffers. As a result, corals build thinner skeletons that are more susceptible to damage from pounding waves or attacks by eroding organisms.

The results show that by the start of the next century, declines in coral skeletal density will occur on many coral reefs.

The impact will be especially strong in the Indo-Pacific region, with up to 20 percent reductions in the densities of coral skeletons in parts of the Coral Triangle — the area bounded by the waters of Indonesia, Malaysia, the Philippines, Papua New Guinea, Timor-Leste and the Solomon Islands. Corals in the Caribbean, Hawaii and northern Red Sea may fare better, the scientists say.

The researchers note that other changes, such as ocean warming, will also affect coral growth.

“Our next step is to expand our model to incorporate the effects of multiple stressors on corals’ skeletal growth,” said Guo. “Knowing the details of how different ocean changes affect corals will enable us to project the trajectory of reef-building corals.”

Added Cohen, “Coral reefs are among the most diverse ecosystems on Earth, with enormous cultural, ecological and economic value.”

This research was also supported by the Robertson Foundation, WHOI, the Ministry of Science and Technology in Taiwan and the Leverhulme Trust in the U.K.