American kestrels, most common predatory birds in U.S., can reduce need for pesticide use 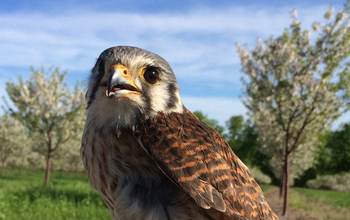 Farmers are reducing the environmental impacts of pesticide use by attracting birds of prey to their lands. In some areas, American kestrels — small falcons — are replacing chemicals by keeping pests and invasive species away from crops.

Results of a new study, led by Michigan State University (MSU) scientists and appearing in the current issue of the journal Agriculture, Ecosystems and Environment, showcase examples.

“Our research demonstrates that predators like American kestrels consume numerous crop pests and reduce crop damage, which are important ecosystem services,” said Catherine Lindell, a scientist at MSU who led the study. “These pest-eating birds can be attracted to agricultural areas through landscape enhancements.”

Lindell and MSU colleague Megan Shave spearheaded a move to bring more American kestrels to Michigan orchards. The researchers installed nest boxes to attract the falcons, the most common predatory birds in the U.S., to cherry orchards and blueberry fields.

Kestrels consume crop pests such as grasshoppers, rodents and European starlings. In cherry orchards, the scientists found, kestrels significantly reduced the number of birds that eat fruit. Results from a related study of blueberry fields are pending.

“These scientists have demonstrated a win-win situation for farmers and birds,” said Betsy Von Holle, a program director for the National Science Foundation’s Dynamics of Coupled Natural and Human Systems program, which funded the research.

“Increasing native predatory birds in agricultural areas can control insect pests that damage crops, and potentially reduce pesticide use. These efforts can help with the reproductive success of declining bird species such as American kestrels, while producing fruit crops attractive to consumers.”

The next steps for Lindell and her colleagues are to measure the effects of specific landscape changes. Nest boxes and perches may bring in predatory birds more effectively, for example, than providing food.

Other MSU scientists contributing to the study include Rachael Eaton, Phil Howard and Steven Roels.