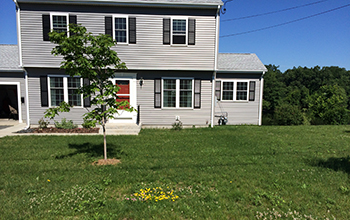 Homeowners concerned about the decline of bees and other pollinating insects need look no further for solutions than their own back yards, says scientist Susannah Lerman of the University of Massachusetts (UMass) Amherst and the U.S. Department of Agriculture’s Forest Service.

In new research, she and colleagues suggest that homeowners can help support bee habitat in suburban yards, specifically their lawns, by changing their lawn-mowing habits.

The researchers found that taking a “lazy lawn mower” approach and mowing every two weeks rather than weekly can help encourage bee habitat in suburban lawns by allowing flowers to bloom. Lerman says that “mowing less frequently is a practical, economical and timesaving alternative to replacing lawns or even planting pollinator gardens.”

Given the pervasiveness of habitat loss for pollinators, the findings offer solutions for homeowners looking to support bees in suburban settings, she adds.

Lerman conducted the study with her colleagues Joan Milam at UMass Amherst, Alix Contosta at the University of New Hampshire and Christofer Bang at Arizona State University. The results appear in the current issue of the journal Biological Conservation.

For the study, supported by the National Science Foundation’s (NSF) Science, Engineering and Education for Sustainability (SEES) program, Lerman and colleagues recruited 16 homeowners in Springfield, Massachusetts, and assigned each owner one of three mowing schedules. Their yards were mowed every week, every two weeks or every three weeks, then tested for how bees responded.

“The decrease in pollinators, and insects in general, is a serious problem,” says Sam Scheiner, an NSF SEES program director. “This research shows that we all can help address this problem with a change in how we manage our lawns, and it demonstrates that basic research can directly contribute to societal needs.”

Before each of five bee-sampling efforts per season, the scientists counted a property’s “yard flowers” (ornamentals not affected by mowing) and “lawn flowers,” such as clover and dandelions growing in grass.

Lerman and colleagues point out that bees are essential for crop pollination and support of natural ecosystems. But both domesticated and wild bee species are in decline around the world, due in part to urbanization, agricultural intensification and loss of habitat.

However, Milam says there’s reason to be cautiously optimistic. “I was amazed at the high level of bee diversity and abundance we documented in these lawns, which speaks to the value of untreated lawns to support wildlife.”

Further, says Contosta, “there is evidence that although lawns are maintained to look uniform, they may support diverse plant communities and floral resources if the owners refrain from using herbicides to kill ‘weeds’ such as dandelions and clover.”

Bang adds that the findings may be applicable to all temperate-climate areas where lawns dominate.

“Sustainability begins at home,” says Lerman, “and in this case involves doing less for more buzz.”