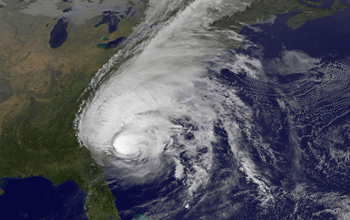 How will estuaries respond to future storms?

Arthur, Bertha, Fran, Josephine. Ana, Joaquin, Hermine, Matthew — each might be a favorite child’s name. But in fact they’re terms for something that’s far from good news: hurricanes.

All hit the coast of North Carolina between 1996 and 2016, leaving destruction in their wakes. The damage included estuaries flooded with excess nutrients, leading to increased algae blooms, fish kills and dead zones.

“In a span of 20 years, coastal North Carolina has been impacted by a major rise in the number of hurricanes, as well as two 500-year flood events: Hurricanes Floyd in 1999 and Matthew in 2016,” said Hans Paerl, a scientist at the University of North Carolina at Chapel Hill. “But the trend isn’t limited to North Carolina. It extends throughout the U.S. North Atlantic and Pacific Ocean basins.”

North Carolina’s hurricanes, including Harvey, Irma and Maria in 2017, likely reflect an overall increase in Category 2 and higher storms, state Paerl and colleagues in a recently published paper in the journal Biogeochemistry.

The scientists set out to chronicle how two decades of hurricanes have affected the second-largest estuary in the U.S.: North Carolina’s Neuse River, which flows into Pamlico Sound. The National Science Foundation (NSF) supported the research through its Biological Oceanography and Chemical Oceanography programs, including a rapid response grant awarded after Hurricane Matthew in 2016.

“One manifestation of climate change may be a higher frequency of storms,” said David Garrison, a program director in NSF’s Division of Ocean Sciences. “This study provides valuable insights into how coastal estuaries will be affected.”

Added Paerl, “Understanding how an increase in extreme events such as hurricanes affects coastal ecosystems is critical to preparing for a stormier future.”

Along with scientist Christopher Osburn at North Carolina State University and other colleagues, Paerl used a long-term dataset to find out how hurricanes have affected the flow of nutrients into the Neuse River estuary and Pamlico Sound. The team tracked changes in populations of phytoplankton — the base of the food web — and in fisheries habitats.

Since 1994, the Neuse River has been the site of a long-term water quality and habitat assessment effort: the Neuse River Estuary Modeling and Monitoring Program. In 2000, scientists expanded the research, placing sensors on ferries that crisscross Pamlico Sound. These projects, said Paerl, “provided baseline data against which we assessed short-term [two-week] and longer-term [several-month] changes that resulted from hurricanes.”

The effects on coastal watersheds were clear from satellite images obtained before and after the storms’ passage, according to Paerl.

Organic matter that washes into the Neuse River estuary is converted into carbon dioxide (CO2) by bacteria, then released into the atmosphere. During Hurricane Irene in 2011, a Category 2 storm, as much CO2 was vented to the atmosphere as is taken up each year by Pamlico Sound’s phytoplankton.

“Hurricanes lead to large discharges of nutrients and organic matter from watersheds,” says Paerl. “These nutrients are then shunted to coastal waters, changing the biogeochemistry of coastal ecosystems.”

“Large amounts of floodwater and organic matter created fuel for developing ‘dead zones’ throughout the estuary,” said Paerl. “In the discharges after Hurricanes Floyd and Matthew, these dead zones grew large enough to affect shellfish and finfish habitats for miles.” Fish kills lasted for months.

Understanding how coastal ecosystems respond to hurricanes and other major storms, including nor’easters and severe thunderstorms, said Paerl, “is important at a time when such extreme weather events are becoming more frequent and intense.”

This big-picture look at the effects of hurricanes on estuaries also indicates that the increased CO2 in coastal waters may have an effect on climate. “The impacts of these infrequent but significant pulses of nutrients into sensitive coastal ecosystems have been mostly unknown,” said Paerl.

Ophelia and Beryl, Earl and Ernesto: hurricanes that have hit the North Carolina coast since 2005. What will the next hurricanes be named? And how will the Neuse River estuary and Pamlico Sound — and marine ecosystems up and down the U.S. East Coast — weather the storms? Paerl, Osburn and other researchers are slogging through miles of hurricane debris to uncover the answers.