Twenty-one species adapted to disappear in the snow. Then, the snow disappeared 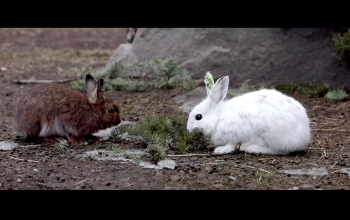 Context is everything when it comes to camouflage. An outfit that would help you blend in when walking through the woods would make you stand out in the middle of a city. Animals have evolved over millennia to use camouflage as a lifesaving way to dodge predators — so what happens to them when, over the course of just a few decades, their environments change?

For snowshoe hares and 20 other species across the northern hemisphere, the white winter coats that once rendered them nearly invisible to predators now make them conspicuous to lynx, foxes, weasels and hawks.

Biologist Scott Mills of the University of Montana, who began studying snowshoe hares in the 1990s with support from the National Science Foundation (NSF), says finding them has become much easier as average winter snow duration has decreased over time.

“For many years my fieldwork focused on getting radio collars on hares and tracking survival and reproduction without much thought about their annual seasonal color molt,” he said. “But more and more as we were out in the field, we were seeing these white lightbulbs in the spring and fall hopping around forests without snow. That got us thinking: What does this compromised camouflage mean for these animals that live or die by their camouflage?”

These mismatched hares showed up at the same time that climate modelers were announcing consistent and drastic decreases in seasonal snowfall across the Northern Hemisphere. After Mills and his students published a series of papers describing the snowshoe hare coat color mismatch, its effect on survival, and how it is likely to increase under climate change, they turned their attention to a global perspective.

In a recent paper published in the journal Science, produced with an international team including five graduate and undergraduate students, Mills asks how evolution has shaped the coat color trait for multiple species around the world, from hares to weasels to arctic fox.

To answer this question, the team visited 26 museums around the world, recording coat color for more than 2,700 specimens collected in the winter.

“When we used the museum specimens to build a validated spatial model of winter coat color, we identified areas where animals of each species turned white in winter but also other areas where they remained brown in winter,” said graduate student Alexander Kumar, one of two co-authors supported on an NSF Graduate Research Fellowship. “And the super-exciting part was that we also identified areas where both winter brown and white individuals co-existed in the same populations.”

That’s where the implications for conservation came in.

“If evolution has shaped this trait, what role would evolution have in helping to further shape the trait to allow continued adaptation in the face of rapid environmental change?” Mills said.

Scientists used to think that meaningful evolutionary changes would take thousands of years to occur. “But now we know that real changes in body type or behaviors can happen really fast. Under the right conditions, evolution can lead to adaptive shifts in just five or 10 generations,” he said.

In the Science article, Mills and team point out that the areas with co-existing winter brown and winter white animals would be places with special potential for “evolutionary rescue,” where genetically driven adaptive traits reverse population decline. By identifying evolutionary rescue hotspots, humans can facilitate that process — like maintaining large and connected populations in these areas — allowing evolution to become an ally for conservation.

“Evolution towards winter brown color morphs would happen fastest in these areas, and they would carry those adaptive genes to the nearby winter white populations,” Kumar said.

Mills said the idea of identifying places where evolution could foster adaptation to climate change extends well beyond snowshoe hares and other species with seasonal coat color change.

“Evolution has been a part of conservation biology from day one, but this paper shows a direct way it can be connected to help animals survive through climate change” he said.

If researchers can identify other traits that are directly shaped by climate and where there are particular areas with especially rich variability in the trait, then those too could be hotspots for fostering evolutionary rescue, or resilience, to climate change.

“One of the most important insights in the last two decades in biology is that evolution is not just for fossils,” he said. “Now we are beginning to see that it could actually play a role in helping species adapt to climate change. Of course, we must keep working to reduce our global carbon footprint. But in the meantime, conservation efforts to foster evolutionary rescue could help maintain biodiversity.”