World Oceans Day: 10 things to know about coral reefs and their microbiomes 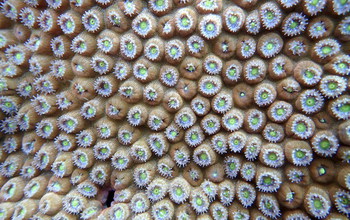 Humans are made up of millions of microbes, collectively called our microbiomes. These microbial “ecosystems” contribute to keeping us healthy.

It’s the same for corals and other species. Corals’ microbiomes play important roles in reef health. Understanding what lies inside corals — and, thanks to a recent discovery, in the waters above coral reefs — will help protect these imperiled ecosystems, under siege from warming ocean temperatures and other threats.

To delve into the hidden world of reef microbiomes, the National Science Foundation (NSF) spoke with coral reef biologist Amy Apprill of the Woods Hole Oceanographic Institution in Massachusetts. Apprill’s research on coral microbiomes is funded by NSF’s Division of Ocean Sciences.

Q: How do coral reefs maintain their colorful diversity of life?

A: Coral reefs are indeed among the most colorful and diverse ecosystems on Earth. They maintain that high biodiversity for two major reasons. Corals build a reef structure that provides habitat in nooks and crannies for many creatures. And reefs have abundant food resources to support this diverse life.

A: Although invisible to our eyes, microbes called picoplankton in the waters around a reef offer critical services to the reef, such as providing energy to recycle nutrients. The most abundant picoplankton are photosynthetic bacteria, which turn the sun’s energy into carbon, and microbes called heterotrophic bacteria and archaea. Ultimately, they’re all consumed by reef animals.

Q: Are corals and picoplankton “communicating” in some way?

A: We believe so, but not in the way you and I might. They’re communicating via chemicals. Corals excrete energy in the form of dissolved organic matter, which picoplankton use to support their growth. In turn, corals obtain advantages from picoplankton, which recycle scarce quantities of the nitrogen corals need as a nutrient. It’s a two-way street.

Q: As part of your NSF-funded project, you talk about exometabolomes. What is an exometabolome and how does it influence a coral reef?

A: Exometabolomes are the molecules that are excreted, or leaked, by corals into the ocean. Exometabolomes are composed of thousands of molecules of dissolved organic matter, which scientists have recently developed the tools to detect and measure. We think the exometabolomes produced by corals and other reef organisms are among the features that allow microscopic plankton around a reef to flourish, and that support a reef’s diverse forms of life.

Q: What species of corals are you studying and why?

Q: What’s the difference between stony and soft corals?

A: Stony corals produce stones, or hard skeletons composed of calcium carbonate, that provide structure to the reef, can grow to the size of a minivan, and last for hundreds of years. Soft corals have more flexible skeletons, and grow upward on the reef. They don’t provide as much habitat for other organisms.

Q: Why did you choose the U.S. Virgin Islands as your research site?

A: Our field sites in St. John in the U.S. Virgin Islands are part of a U.S. national park. It’s protected from fishing activities and coastal development. That’s important because we want to study natural ecosystem interactions.

Q: Is there a season when it’s best to study coral reefs?

A: Not really, but we do have preferred times to study the reefs. We try not to go to Caribbean reefs when it’s hurricane season — late summer and early fall. My favorite time to visit tropical reefs is when it’s winter in my hometown on Cape Cod.

Q: How did Hurricanes Irma and Maria affect your research?

A: These two category 5 hurricanes destroyed the research station on St. John, and we had to cancel our field work scheduled for this summer. But my team has access to a research vessel this fall. We’ve moved our research to the late fall so we can conduct our experiments in a seawater aquarium system we’re building on the boat. While the hurricanes did impact some parts of the reefs, thankfully, the deeper reefs were less affected.

Q: On World Oceans Day, what can we all do to help coral reef conservation?

A: During this week leading up to World Oceans Day, and throughout the year, we can help by appreciating the importance of coral reefs and understanding the threats facing them. By becoming more educated about reefs and how they’re affected by human activities, we can all do a better job of contributing to decisions to protect coral reefs now and in the future.

#1736288 Signature exometabolomes of Caribbean corals and influences on reef picoplankton