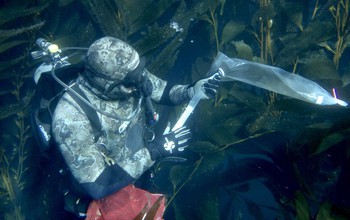 Kelp uses an alternate form of dissolved nitrogen to grow

One of the fastest-growing organisms on Earth, giant kelp can grow 2 feet a day and reach almost 150 feet in length — in one growing season.

Growth spurts of this large seaweed are fueled by a diet of dissolved nitrogen. One of the main forms of nitrogen is nitrate, and although nitrate is scarce in the summer and fall, giant kelp continues to grow year-round.

Details of their findings appear today in a paper in the journal Limnology and Oceanography Letters.

More than one form of nitrogen

Nitrate and another form of nitrogen, ammonium, are the only sources kelp had been known to use. “We looked at ammonium. But its presence wasn’t able to explain the full amount of growth we were seeing in the summer,” explained lead author Jason Smith of the University of California, Santa Barbara (UCSB).

The scientists discovered that kelp also uses another form of dissolved nitrogen, urea, found in abundance in coastal upwelling zones such as the Santa Barbara Channel.

“Urea is a common fertilizer,” said Smith, “so it’s present in runoff. And there are natural sources as well.”

When the scientists measured urea in the ocean, they found it to be consistently present year-round, and concentrations tended to be higher than those of ammonium and nitrate in the summer.

“This report provides an explanation for how giant kelp in Southern California is able to persist and grow when nitrate concentrations in coastal waters are extremely low,” said David Garrison, a program director in NSF’s LTER program, which funded the study.

The researchers conducted experiments on giant kelp in the field, and on kelp blades brought back to the lab. Smith and his colleagues tested whether the seaweed was able to take advantage of urea as a nutrient, and compared growth rates when ammonium and nitrate were used as nutrients.

“It turned out that kelp consistently showed no preference, and used urea at equal rates as ammonium,” Smith said. “Our results suggest that there’s enough urea available to sustain kelp growth when levels of ammonium and nitrate are low.”

However, calculating a rate of use for these different compounds provided only half the answer.

“We performed a set of controlled experiments on kelp tissue to prove that the urea molecule itself enters the tissue,” Smith said. “We’re the first to document for any seaweed that the whole urea molecule is consumed, which greatly expands the known physiology of giant kelp and the kinds of nitrogen forms the plant can use.”

Urea: present in coastal oceans around the globe

Scientists know that urea has a persistent presence in the coastal ocean, not only off the coast of California but in coastal oceans globally. The finding helps explain seaweed growth in many places.

Added co-author Dan Reed, principal investigator of the NSF SBC LTER site and a scientist at UCSB, “Knowing that giant kelp uses urea, and that urea isn’t related to the availability of nitrate in the ocean, gives scientists a way of understanding the reasons kelp growth seems to differ from that of phytoplankton.”

Scientists at the NSF SBC LTER site would like to know how nitrogen use is divided between kelp and phytoplankton, and whether ocean warming will have the same effect on giant kelp as on phytoplankton.

All nitrogen, the researchers said, is clearly not the same.