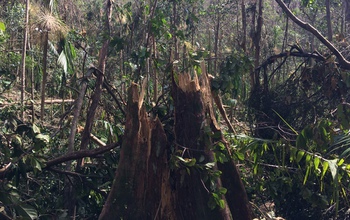 With fierce winds and flooding rains, hurricanes can be disasters for people — and for ecosystems.

These devastating storms may have major effects on tropical forests, demolishing forest canopies and leaving behind debris that piles up on forest floors. But new research suggests that the ecological disturbances caused by hurricanes may — in the long-term — have positive impacts on tropical forests.

The hurricanes included storms prior to Irma and Maria, which made landfall in Puerto Rico last September.

The researchers focused on two major hurricane disturbances: canopy opening, the damage to vegetation that creates spaces open to sunlight; and woody debris deposition, the fallout of broken limbs and branches.

Results of the study are reported in a paper in the journal Global Change Biology.

The ecologists found that in some cases, forest disturbances caused by hurricanes led to increased levels of nutrients in soils. For tropical forests, these are the building blocks of ecosystem resilience.

“Hurricanes are destructive, but they’re also a mechanism of nature’s renewal,” said Richard Yuretich, the NSF CZO program director. “This study shows that storms can be beneficial over the long term by increasing soil fertility, which will ultimately help the recovery of an ecosystem.”

The study relied on soil samples from a series of experimental plots that are part of a long-term field study called the Canopy Trimming Experiment. Ten years before the soil sampling, Luquillo scientists manipulated large plots in the forest to simulate the disturbances caused by hurricanes.

“Our research showed that tropical forest soils can capture and store carbon and nutrients following hurricanes, helping to prevent losses of these elements and aiding in the forest’s recovery process,” said Whendee Silver, a biogeochemist at the University of California, Berkeley, and senior author of the paper. “An increase in the frequency or severity of severe storms with climate change may remove this safety net, however.”

In a realistic hurricane simulation, the opening of a forest canopy would result in debris deposition. Wind and rain would cause the forest canopy to break apart, and tree branches and trunks to land on the forest floor.

Soil carbon and concentrations of nutrients such as phosphorus were greatest in the debris-only treatment, suggesting that organic matter deposited on a forest floor after a hurricane is partially incorporated into the soil, increasing soil fertility.

“Climate models predict increases in severe weather events, including increasing hurricane strength and frequency,” says Colette St. Mary, an NSF LTER program director. “This decade-long study shows that soils have the capacity to mitigate some of the effects of hurricanes.”

Hurricane-driven redistribution of organic matter in soils provides the nutrients needed for forest ecological communities to bounce back from severe storm impacts, the researchers found.

“But it’s uncertain whether these responses will be maintained if more hurricanes happen,” says Omar Gutiérrez del Arroyo of the University of California, Berkeley, lead author of the paper. “It’s important for the forest canopy to re-grow before another hurricane. If hurricanes become more frequent, that might lead to a decrease in soil fertility and carbon storage — with major implications for ecosystem stability.”

Studying the effects of severe storms on soil carbon and nutrient cycling in the Luquillo Canopy Trimming Experiment is enabling researchers to make better predictions of hurricane fallout on tropical forest ecosystems.

Related Websites
NSF Discovery: Can an ancient ocean shoreline set the stage for a tropical forest of today?: https://www.nsf.gov/discoveries/disc_summ.jsp?cntn_id=242383&org=NSF