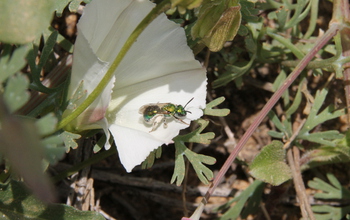 What’s all the buzz about?

If you’re moving pollen from one plant to another, you might be a pollinator.

Pollinators come in all shapes and sizes: butterflies, beetles, birds, bats and even humans. The only job requirement is that they transfer pollen from stamen to pistil (a flowering plant’s male and female organs). As pollinators visit flowers to drink nectar or feed on pollen, they move pollen from flower to flower and help plants reproduce. Pollination is an ecological service — a role an organism plays in its ecosystem that is essential to human life .

Bees are some of the most important crop pollinators. They increase production of about 75 percent of our crop species. When we think of bees, we tend to think of fat, fuzzy, black and yellow insects buzzing around the flowers in our garden. But fuzzy bumblebees don’t have a monopoly on ensuring that flowers bloom again and blossoms turn into fruit. Across North America alone, there are more than 4,000 wild bee species of all shapes and sizes, from the fluffy bronze Tetraloniella davidsoni to the iridescent emerald Agapostemon texanus. Researchers have found that this staggering biodiversity — besides making our gardens and countryside beautiful — is critical for many types of ecological services, including pollination.

NSF-funded researcher Rachael Winfree and her team at Rutgers University revealed just how important pollinator biodiversity is for crops in a recent study conducted across dozens of watermelon, cranberry and blueberry farms in the mid-Atlantic United States. Though many farmers use domesticated, non-native honey bee colonies to help with crop pollination, researchers estimate that wild pollinators provide half of the crop pollination services worldwide.

Winfree’s team found that although a few dominant species are critical at smaller scales, when an entire region is considered, a high level of biodiversity is needed to ensure farmers’ crops receive adequate pollination services. They found that, while on any one farm five or six wild bee species were able to provide half of the pollination, most of the 100 bee species observed in the study were needed to meet that same threshold across the nearly 50 farms in the region.

But biodiversity isn’t just for “country” bees on farms. James Hung, who received NSF funding as a doctoral student and who worked in David Holway’s lab at the University of California San Diego, investigated the effects of urbanization on changes in wild bee diversity over time. Man-made disturbances to habitats are creating problems for pollinator communities, including significant biodiversity loss.

Hung’s research revealed that habitat fragmentation due to human activity reduces bee diversity and creates a shift in natural seasonal changes that influences the number and type of bees present, affecting pollination services. Though the total number of bees was similar, that number peaked later in the year in fragmented habitats compared to undisturbed ones. Hung also found that bees living in urban scrub fragments possess relatively less variation in behaviors and physical characteristics (for example, food preferences), meaning they might not be able to render the range and quality of pollination services that bee communities in undisturbed habitats can provide. The loss of diversity and changes to seasonal turnover of bee species may threaten plant pollination in the community and potentially even crops that rely on wild bee species for pollination.

What can we do to protect biodiversity and help both our pollinator friends and ourselves at the same time?

Farmers can help by planting fallow fields and road edges with flowering plants to support wild pollinators throughout the growing season, and by reducing pesticide use, especially during crop bloom when more bees are in their fields. The average person can help, too. By filling their gardens with diverse, native plant species and limiting pesticides, anyone can create more pollinator-friendly spaces and help keep their local pollinator community diverse, healthy and beautiful.