Working with the Cajun Navy: Optimizing the use of volunteers in disaster response 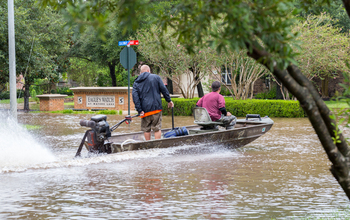 After hurricanes Harvey and Irma, the National Science Foundation (NSF) funded research to investigate the broad impacts of these disasters. A year later, some of the researchers funded by awards from the agency’s Social, Behavioral, and Economic Sciences Directorate are reporting results produced to date. In this first entry, Michelle Meyer, assistant professor of sociology at Louisiana State University, and Brant Mitchell, director of the Stephenson Disaster Management Institute at Louisiana State University, describe their findings to date about the roles of volunteers in the rescue efforts during Hurricane Harvey.

Volunteers play an important role in the aftermath of disasters — distributing resources, providing advice on courses of action to community members, helping with evacuations and sometimes even saving lives. Sometimes, however, uncoordinated efforts can lead to wasted time and resources and, in worst case scenarios, can put volunteers and official emergency responders in increased danger.

We wanted to understand the details of the roles played in the aftermath of Hurricane Harvey by the volunteer rescuers known colloquially as the Cajun Navy. What motivated them? Did they coordinate with each other or with official disaster response teams? If so, how? Are there ways that official response teams can best make use of volunteers?

Our undergraduate research assistant, Hailey Teachout, preliminarily identified five common volunteer motivations: the need to “do something;” cultural identity; involvement of technology; having the resources to help; and having the free time to respond. The resources to help include boats, but also social media and technology expertise, computer programming and dispatching. Some common communication and logistical protocols used by the rescue groups, for example, grew from a team of video game players who played a location-based, augmented-reality mobile game on their phones.

Social media, especially Facebook and Zello (a walkie-talkie-like app), allowed groups to quickly create a division of labor that mimicked traditional rescue operations. For example, volunteer dispatchers reviewed social media for rescue needs and dispatched boaters to those locations. Dispatchers were located across the country and world due to social media. Multiple groups formed and are developing plans to continue their rescue efforts in future disasters.

Social media also allowed volunteers to bypass formal emergency management personnel. While this vastly quickened the response time and was absolutely necessary to rescue people in a timely manner, it also created confusion. Communication between volunteers and formal emergency management was negligible in most locations. Proper safety protocols for rescues were not always followed, volunteers often entered dangerous areas unknowingly, and volunteers lacked information on appropriate shelters. The best coordination occurred when city officials gave specific instructions on where volunteers should meet to sign in with emergency services and then coordinated to help dispatch volunteers.

Emergency services officials we spoke with all wished that willing volunteers would first contact their own local emergency manager or fire chief and ask about volunteer opportunities in their own backyard. This would provide local communities with better capacity year-round, not just during disasters, and would build the trust between emergency management and volunteers that proves useful during disasters. Future needs for emergency management include planning exercises to practice coordinating a surge of these types of volunteers and integrating social media as a two-way communication tool into emergency operations centers.

The media often portray the Cajun Navy as a group of outdoorsmen from Louisiana who use flat-bottom boats to conduct water-based rescues. We learned that the “Cajun Navy Movement” is much broader and more diverse in expertise, skills, experience with boats and rescuing, and motivations — along with being diverse by gender, age, race, ethnicity and income. With planning and improved communication, more could be done to coordinate and make the best use of these skills in future disasters as more community members rise to the challenge to help their communities near and far.