The importance of community networks to disaster resilience 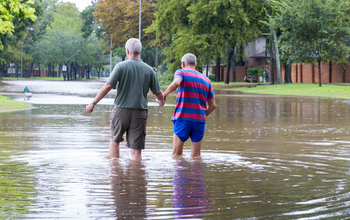 After hurricanes Harvey and Irma, the National Science Foundation (NSF) funded research to investigate the broad impacts of these disasters. A year later, some of the researchers funded by awards from the agency’s Social, Behavioral, and Economic Sciences Directorate are reporting results produced to date. This is the fifth article in the series. Kevin Fitzpatrick, a professor of sociology, and Matthew Spialek, an assistant professor of communication, both with the University of Arkansas, are investigating the role of social networks and community resources in helping citizens recover from Hurricane Harvey.

We worked in the Houston and Corpus Christi areas, two areas hardest hit by Hurricane Harvey, to understand the role of social connections and resources in hurricane response and community recovery on the individual level. Our results reveal, first, missed opportunities to harness social capital for disaster preparedness and, second, a greater need for government agencies and disaster relief organizations to effectively communicate with the public before, during and after disasters.

Regarding the first missed opportunity, residents were an untapped resource in disaster preparedness efforts. Residents belonged to an average of three community organizations, and more than two-thirds of residents reported a sense of connection to their communities. Even though these connections existed and, in theory, could have been a bridge to improve resiliency, in reality residents did not use these connections to improve risk awareness or to improve individual or household preparedness. This finding reinforces the view that individuals in the U.S. are generally underprepared for disasters even in disaster prone regions, and that more work is needed to draw on social ties to increase disaster readiness.

Regarding the second missed opportunity, negative perceptions about preparedness and response efforts illustrate the need for government agencies and disaster relief organizations to improve communication with residents. For instance, nearly half of the people we interviewed did not think that their community actively prepares for disasters, despite municipalities potentially having preparedness plans in place. These same respondents, who crossed the political spectrum and included Republicans, Democrats and Independents, expressed significantly higher levels of satisfaction with local disaster response efforts compared to the federal government’s response — this despite the fact that they believed their community was not actively prepared.

This dissatisfaction may be due in part to a perceived lack of a federal presence in the Texas Gulf Coast. This perception does not match the reality that, as of November 2017, 35 fixed or mobile disaster recovery centers were established in the area. This mismatch between emergency management performance in these communities and the perception of a lack of government coordination and provision of resources highlights the need for state, local and federal agencies to do more to educate the public about existing plans and efforts.