Tales from the crypt: Life after death in a graveyard 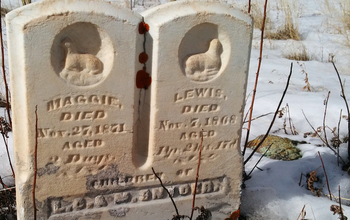 Thought cemeteries were only for the dead? Not so, say scientists Noah Fierer and Tess Brewer of the University of Colorado Boulder. Fierer and Brewer found that graveyards are in fact places of the undead — in the form of microbes on tombstones.

The researchers, who took samples from the surfaces of 149 gravestones in the Cementerio de Montjuic in Barcelona, Spain; El Queremal Cementario in Valle de Cauca Province, Colombia; Dory Hill Cemetery in Black Hawk, Colorado; and other graveyards, recently published their results in the journal Environmental Microbiology.

“Rock surfaces like gravestones are challenging environments for microbes,” says Fierer. “But despite exposure to high levels of ultraviolet radiation and sporadic access to water and nutrients, microbes are able to thrive there.”

To find out which microbes grow on rock surfaces and how they do so, Fierer and Brewer used toothbrushes to collect samples from tombstones.

Several characteristics of each tombstone were recorded, including rock type, length of tombstone exposure (based on date of death), direction of the sampled face (cardinal direction) and surface texture (polished or unpolished).

“Grave markers are well-suited to studying the microbial life that grows on rocks,” says Brewer. “Tombstones are found around the world, are composed of only a handful of different rock types, and cemeteries harbor markers of various compositions and ages.”

Scientists have known that microbes are important in the breakdown of rocks into soil, “but this study goes a step farther, showing that microorganisms have different ‘tastes’ for rock type,” says Richard Yuretich, program director in the National Science Foundation’s (NSF) Division of Earth Sciences, which funded the research.

“Such discoveries can help in a wide range of applications, such as improving soil fertility for agriculture and preserving the stone facings of buildings and monuments,” Yuretich says. “The findings also bring a whole new dimension to the question: ‘What do you want on your gravestone?'”

Fierer and Brewer found that rock type is a good predictor of which microbe species grow on tombstones.

“Microbes appear to care more about rock characteristics than climate or how long a tombstone has been standing,” says Brewer.

The scientists found that granite tombstones hosted microbes capable of acidifying their environment — then surviving those acidic conditions.

When exposed to microbially-produced acids, granite tombstones gradually become pitted as bits of rock are dissolved. “The pits likely serve as mini-domiciles for microbes, conferring some degree of protection against inhospitable conditions,” says Fierer.

Microbes eking out an existence on granite are also more likely to have genes linked with mobility, a trait that allows them to seek out better micro-environments when necessary.

In contrast to the surfaces of granite gravestones, those of limestone tombstones are less acidic. “Limestone surfaces are also more likely to harbor lichens — symbiotic communities composed of fungi and photosynthesizing cyanobacteria or algae,” says Brewer.

The results show that gravestones are great places for understanding microbes’ survival on rock surfaces and their contributions to rock weathering, the scientists say.

“The occupants of tombstone surfaces can also teach us a lot about the strategies microbes use to survive in inhospitable environments,” says Fierer. “At first glance, a gravestone looks like a place where nothing could exist.”

Although tombstones memorialize the dead, he says, they also host the living.