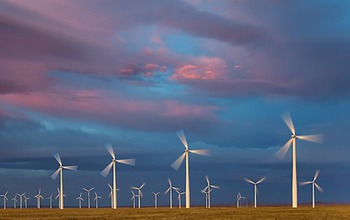 As onshore and offshore wind energy farms have proliferated in recent years, new research highlights a previously underexplored consequence: a wake effect from upwind wind farms that can reduce the energy production of downwind neighbor turbines.

The study, by University of Colorado Boulder (CU-Boulder) scientists working with University of Denver and National Renewable Energy Laboratory (NREL) researchers, combines economic analysis with atmospheric modeling to demonstrate that these wake effects — which occur when groups of turbines reduce wind speed for up to several miles behind them — are measurable and predictable, yet remain largely overlooked.

“This project explores the links among economic, legal and social issues and the geophysical processes in wind energy production,” said Tom Baerwald, a program director for the National Science Foundation’s (NSF) Dynamics of Coupled Natural and Human Systems program, which funded the research. “The results advance our understanding of these interactions and provide guidance for successful development of renewal energy for the future.”

The findings appear this week in the journal Nature Energy.

“We highlight the need for coordinated development and awareness of the big picture to maximize wind energy generation nationwide,” said Julie Lundquist, lead author of the study and a scientist at CU-Boulder.

The researchers found that wind energy developers seek out sites with reliable wind resources and access to electrical transmission lines, leading to dense turbine construction in choice areas, with little coordination between competitors. Nearly 90 percent of U.S. wind farms are located within 25 miles of another wind farm — and often much closer.

Yet, much like a homeowner whose once-unimpeded views are blocked by new construction, the study shows that existing wind farms stand to lose valuable energy production if they suddenly find themselves downwind of a new neighbor and its wind- and energy-reducing wake.

They found that wind speed reductions due to the establishment of the upwind farm reduced power generation at the downwind farm by 5 percent between 2011 and 2015, an estimated revenue loss of around $3.7 million.

“Just as upstream water users can knowingly or unknowingly impose additional costs downstream, the same effect is in play here,” said Daniel Kaffine of CU-Boulder, a co-author of the study. “We had a general sense of this interaction before and wanted to explore it using a mix of social science and atmospheric data.”

Kaffine and Lundquist noted that Texas makes for a good case study because of its current and future stake in wind energy development.

More than a century ago, oil and gas law recognized the “rule of capture,” which allows a landowner to capture a neighbor’s oil resources by taking them from an adjacent well. This resulted in poor well-field recoveries and waste, so states intervened to regulate production through well-spacing, pooling and other coordination measures.

“In the immediate future, some business incentives might change,” Kaffine said. “Energy firms might put more emphasis on securing leases upwind to ensure they have enough of a buffer.”

Lundquist emphasized that the team’s sophisticated atmospheric science simulations show that the wake effect is a predictable atmospheric phenomenon that can be modeled and planned for in light of the new data.

“The strongest wakes occur at night, when the atmosphere is stable and wind speeds and directions meet specific criteria,” said Lundquist. “In the month of wakes simulated, only 28 hours, or less than 4 percent of the time, had wakes in excess of 20 percent of the downwind farm’s capacity, suggesting this episodic issue can be predicted and managed.”

Taking the wake effect into account will be especially important for the large number of offshore wind farms currently in development off the U.S. East Coast, Lundquist added.

“Offshore wind farms are important, but they are expensive to build — and mistakes will be equally expensive,” she said.

The researchers hope to expand their efforts to measure wind farm wake effects by incorporating aircraft measurements as well as obtaining data on more frequent timescales from other sites around the country.