The flip side of a reef: Coral, seaweed — or both? 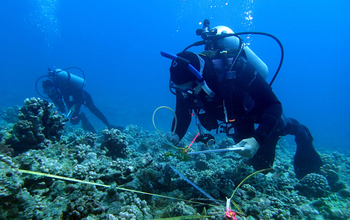 Tropical reefs can change their composition from vibrant corals to underwater fields of seaweed. Now, researchers have determined that, surprisingly, these communities can exist under the same conditions.

The findings, which appear in this week’s issue of the journal Proceedings of the National Academy of Sciences, may have broad implications for reef conservation, the study’s authors say.

Macroalgae, or seaweed, often outcompetes coral on reefs unless it’s kept in check by herbivores such as algae-eating fish. The amount of herbivory on a reef is a major factor in determining whether the site will become a coral reef or a seaweed field.

“Reefs in many parts of the world have switched from coral to seaweed, and the question is what keeps the reef dominated by seaweed rather than remaining as coral,” said scientist Sally Holbrook of the University of California, Santa Barbara (UCSB), a paper co-author.

Habitat for coral or seaweed?

One possibility is that the environment has changed in a way that favors seaweed, and that even if the seaweed disappears, the new conditions may no longer suit coral.

The researchers wanted to determine whether there might be another explanation, one with other implications for coral reef management.

They explored whether a coral community and a seaweed community could exist in the same conditions by manipulating the amount of herbivory on a reef.

At the National Science Foundation (NSF) Moorea Coral Reef Long-Term Ecological Research (LTER) site in French Polynesia, the researchers decreased herbivore activity to different levels by caging off certain areas of the reef so fish couldn’t get in to nibble at the algae.

The team set up cages the size of toaster ovens in areas that did or didn’t have seaweed. Each section had cages with various opening sizes. That created a gradient — at some sites, few fish could get in, while at other sites, only the larger fish could dart in for a snack.

The setup let the researchers determine what levels of herbivory prevented seaweed from taking hold, as well as what levels were needed to remove seaweed that was already there.

“We found that it takes more herbivory to remove seaweed than it does to prevent it in the first place,” said Russ Schmitt of UCSB, the paper’s lead author. “That means there’s an amount of herbivory where the habitat could persist either as a coral reef or as a seaweed-dominated reef.”

The scientists simulated a disturbance such as a hurricane by scrubbing algae off small patches of a section of seaweed-dominated reef. Untouched areas remained in their initial seaweed state, while moderately disturbed areas returned to seaweed fields and stayed that way for years.

The flip side of a reef

The results show that it’s more difficult to restore an altered system to its previous state — such as returning a seaweed-covered lagoon to a thriving coral reef — than it is to maintain a community in its initial condition.

The findings also suggest that even a seemingly healthy ecosystem could be vulnerable to dramatic shifts. A large enough change could alter the entire ecosystem, say the scientists.

NSF LTER program director Dan Thornhill said of the experiment’s findings: “Coral reefs are slipping away. We’re seeing a global shift from coral reef ecosystems to seaweed fields. But these scientists show that under the right conditions, reefs can rebound.”