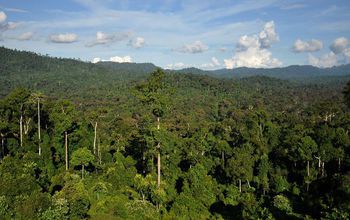 The world’s forests are increasingly taking up more carbon, partially offsetting the carbon being released by the burning of fossil fuels and by deforestation in the tropics, according to a new study.

The findings, published in the journal Biogeosciences, suggest that forests are growing more vigorously, and therefore, locking away more carbon. Even so, the concentration of heat-trapping carbon dioxide in the atmosphere is still on the rise.

“Every decade, Earth’s forests are taking up carbon faster than the previous decade,” said Britton Stephens, a co-author of the study and a scientist at the National Center for Atmospheric Research (NCAR), which is funded by the National Science Foundation (NSF).

“The same is true of the oceans,” said Stephens. “Even together, the ocean and the land are not keeping up with industrial carbon emissions, and the global concentration of carbon dioxide in the atmosphere is rising at an accelerating rate.”

The increased plant growth in global forests could be due to several factors, including higher concentrations of carbon dioxide in the atmosphere, warmer temperatures and increased availability of nitrogen.

“The forests we aren’t cutting down in the tropics are taking up a lot of carbon,” Stephens said.

“This team of scientists has significantly improved our knowledge of how much carbon dioxide gets into the atmosphere,” said Sherri Hunt, a program director in NSF’s Division of Atmospheric and Geospace Sciences. “Understanding what factors control the amount of this important greenhouse gas is critical for predicting future climate conditions and estimating the contribution of human actions.”

A convergence of models

The study relies on a synthesis of results from “inverse transport models”– atmospheric models run in reverse.

Scientists input the “results” — the actual levels of atmospheric carbon dioxide measured worldwide during the past several decades — and force the models to predict how much carbon dioxide must have been emitted and re-absorbed in different regions to match the measurements.

This effort is the third inverse transport model comparison project of this scale. “The models now agree a lot better with each other and with independent aircraft data,” said Gaubert. “Collectively, they are telling us that both the tropics and the northern temperate region are taking up more carbon than in the past, but the amount being taken up by intact tropical forests is a bigger surprise.”

The remaining disagreement among the models is mostly related to uncertainty about how much carbon is being emitted into the atmosphere by the burning of fossil fuels. Previously, the uncertainties most affecting the models were related to sparse observations and the physics in the models themselves.

How carbon moves through tropical forests

“Despite the fact that all the models we used are built differently, they come to similar solutions, which reflects our increased understanding of how carbon moves through the Earth system,” said Gaubert. “To further zero in on where the carbon is going, we need better inventories of society’s carbon emissions.”

The new study finds that, averaged over the past decade, the carbon flux in the tropics is about zero — meaning the additional amount of carbon being released by deforestation (an estimated 1.5 billion metric tons a year) is being compensated for by increased uptake in the remaining forest.

This capacity of intact forests to act as carbon sinks suggests that additional carbon dioxide in the air may be fertilizing those forests, allowing them to grow and store carbon more quickly, although changes in precipitation, temperature and deforestation could also be playing important roles.

The researchers said it isn’t clear how long Earth’s land areas will be able to keep increasing carbon uptake in the face of ongoing deforestation and continued emissions of fossil fuels.

“The limits of carbon fertilization aren’t yet well understood,” Stephens said. “But we do know that fossil fuel emissions are outpacing Earth’s ability to take up carbon, and the gap may widen in the future.”