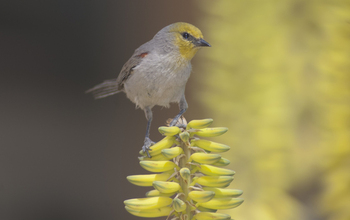 Ecologists have long wondered about the impact of urbanization on bird biodiversity. Are cities with higher avian biodiversity showing signs of an “extinction debt” — populations that haven’t yet disappeared but are doomed to extinction — or are other factors playing a role in biodiversity changes?

Now there are new answers. Researchers Paige Warren of the University of Massachusetts Amherst and Susannah Lerman of the U.S. Department of Agriculture Forest Service, along with Riley Andrade, Kelli Larson and Heather Bateman of Arizona State University, report results of their long-term study of birds in Phoenix, Arizona, in the current issue of the journal Ecosphere.

The scientists looked at birds over time in relation to habitat, human responses and other factors. The findings suggest that although birds’ presence and the number of species decreased over time, some desert birds can still be found in areas where homeowners provided desert landscaping — vegetation that has adapted to the desert and is tolerant of drought.

“The fact that all kinds of bird species are declining is particularly troubling to us,” says Lerman. However, Warren adds, “if we could encourage homeowners to provide more desert plantings, there may be opportunities to retain the richness of bird species, even in backyards.”

The recent study follows an earlier investigation by Warren and Lerman that found associations between bird species and landscaping arrangements.

Five years after the first study, the researchers revisited the same 39 neighborhoods to evaluate changes in birds to discover which ones persisted over time, whether desert birds continued to associate with desert-like landscapes, and whether socio-economic inequalities in access to bird biodiversity had persisted.

“It’s surprising and worrisome that birds are declining in neighborhoods that appear otherwise unchanged,” says Doug Levey, an NSF LTER program director. “Something is going on, and these scientists are well on the way to figuring it out.”

They report that average bird occupancy — places where a species is found — decreased between the two periods by 9 percent, from 46.7 to 37.8 percent, and that numbers of six of 11 desert species declined.

The scientists documented significant losses in bird species’ richness and abundance, particularly in desert species. However, they state in their paper, “some of the obvious mechanisms of regional population trends or local-scale environmental change do not appear to account for these losses, raising the possibility of an ‘extinction debt.'”

Lerman says that a loss of bird species in homeowners’ yards could significantly affect a vibrant and unique desert fauna. She hopes that this new information “will inspire residents and local gardening organizations to landscape with birds in mind.”