Tracking a supercell thunderstorm across the Great Plains 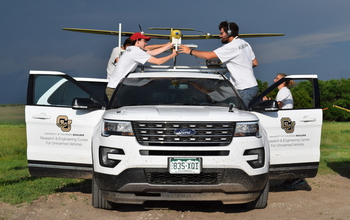 Scientists to conduct most ambitious drone-based tornado fieldwork to date

The most ambitious drone-based investigation of severe thunderstorms to date will soon be launched by atmospheric scientists at the University of Nebraska-Lincoln and three partner institutions: Texas Tech University, the University of Colorado Boulder and the National Oceanic and Atmospheric Administration’s National Severe Storms Laboratory.

The research will employ radar and unmanned aircraft systems (UAS) to reveal the small-scale structures in a supercell storm that contribute to tornado formation. Scientists hope to reduce the number of “false alarm” tornado warnings and improve detection of potentially lethal storms.

The Targeted Observation by Radars and UAS of Supercells (TORUS) study has been awarded a three-year, $2.4 million National Science Foundation grant. NOAA is also providing support for TORUS.

“To understand how tornadoes are formed, we need to study their parent storms, called ‘supercells,'” said Chungu Lu, a program director in NSF’s Division of Atmospheric and Geospace Sciences, which is funding the project. “In TORUS, scientists will deploy a suite of radars and drones to observe supercells. The results will increase our ability to forecast tornadoes.”

More than 50 researchers are making final preparations for the May 14 project launch at the Salina, Kansas, Regional Airport. Fieldwork will continue until June 16 and will cover a 367,000-square-mile area of the Central Great Plains from North Dakota to Texas and Iowa to Wyoming and Colorado.

“If there’s a severe thunderstorm anywhere in the region, we hope to be there,” said Adam Houston, an atmospheric scientist at the University of Nebraska-Lincoln and one of several TORUS principal investigators.