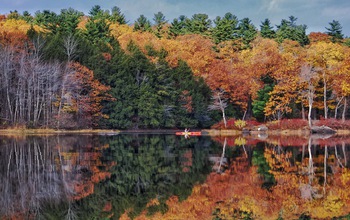 Land conservation boosts local employment rates, according to an analysis of 1,500 New England cities and towns. The research was led by scientists at Amherst College, Harvard Forest, the Highstead Foundation and Boston University.

The study, funded by the National Science Foundation’s Long-Term Ecological Research (LTER) Program, was published in a recent issue of the journal Conservation Biology.

The study is the first of its kind, estimating the local impacts of both private and public land conservation from 1990 to 2015.

The research revealed that when land conservation increased, employment also increased over the five-year period that followed.

Employment gains were modest but significant across the region; the effect was amplified in more rural areas, the scientists found. If a town with 50,000 employed citizens increased its land protection by 50 percent, it saw, on average, 750 additional people employed in the next five years.

The researchers say the gains may have been driven by new jobs in tourism and recreation, as well as by the preservation of jobs in areas with commercial timberlands that support timber harvests, non-timber forest products such as maple syrup, and public access and recreation.

“New England is unique in that most of the land is privately owned by hundreds of thousands of individual landowners,” said Jonathan Thompson, an ecologist at NSF’s Harvard Forest LTER site. “We’ve shown that when private landowners protect their land, the benefits extend beyond nature and into their communities.”