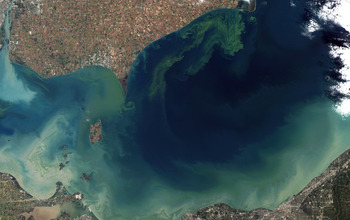 Since the late 1990s, Lake Erie has been plagued with blooms of toxic algae that turn its waters a bright blue-green. These harmful algae blooms are made up of cyanobacteria that produce the liver toxin microcystin.

The blooms have led to public warnings to avoid water contact. In August 2014, for example, high microcystin concentrations were detected in drinking water from the lake. As a result, the water supply to 400,000 people in Toledo, Ohio, was shut down.

“Algae blooms can be a mixture of toxic and non-toxic forms, and different species of microcystin-producing cyanobacteria can inhabit different parts of Lake Erie,” says George Bullerjahn, director of the Great Lakes Center for Fresh Waters and Human Health. The center is headquartered at Bowling Green State University in Ohio, and is supported by the National Science Foundation and the National Institute of Environmental Health Sciences.

Scientists at the center are conducting research to understand why harmful algae blooms happen in particular parts of Lake Erie. Their studies will help determine strategies to mitigate the blooms.

Nutrients that fuel cyanobacteria blooms usually come from the nitrogen in agricultural runoff; the runoff makes its way into streams and rivers, eventually flowing into large waterbodies such as lakes. “Our studies show, however, that Planktothrix is also able to thrive in environments that are nitrogen-depleted,” says Bullerjahn.

Areas near shore are prone to nitrogen loss as summer progresses and the amount of rainfall – and runoff – decreases, Bullerjahn says. Nutrients from spring rains spark Planktothrix blooms, but their persistence through late fall is due to the ability of the Planktothrix cyanobacteria to “scavenge” nitrogen from their environment better than Microcystis can.

“In one way or the other,” says Bullerjahn, “nitrogen seems to be the common driver for toxic blooms of Planktothrix not only in Lake Erie, but worldwide.” The mechanism is a mystery, but researchers at the Great Lakes Center for Fresh Waters and Human Health are hot on the blooms’ trail.