Dance of the microbes: Bacteria living near coral reefs change in synchrony across distances 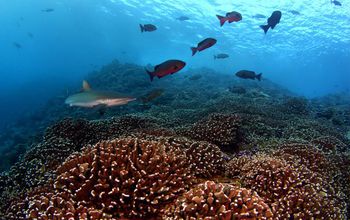 Changes happen in sync in reefs separated by hundreds of miles

It might be called the dance of the microbes. It happens every day — and night.

Bacteria in waters above dozens of coral reefs change dramatically during the night, scientists have discovered, then return to the same daytime community they lived in the morning before. As if these communities are all on the same schedule, the changes are synchronized in reefs separated by hundreds of miles, the researchers report in the current issue of Nature Communications.

In coral reef ecosystems, microorganisms are essential for recycling nutrients that are important to reef organisms – transforming bits of organic matter into nitrogen and phosphorus, for example.

Investigations of day and night rhythms of reef processes are needed to understand the roles of microbes in these ecosystems, according to Linda Wegley Kelly, a marine biologist at San Diego State University and co-lead author of the study.

Also participating in the research were scientists at the University of Hawai’i at Manoa and the Scripps Institution of Oceanography.

“This research team is one of the first to look at changes in the microbial communities of coral reefs through both day and night,” says Dan Thornhill, a program director in the National Science Foundation’s Division of Ocean Sciences, which funded the study. “The scientists uncovered the important role of nighttime microbes in recycling the nutrients on reefs.”

The scientists conducted a research expedition to the Southern Line Islands, a remote island chain south of Hawai’i. They collected water samples just above coral reefs at midnight and again during the day to compare changes between night and day water chemistry and microbes.

“Reef ecosystems change significantly from day to night, but this study reveals one previously invisible aspect: a dramatic and predictable shift not only in what microbes are doing, but which microbe groups are most abundant,” says Craig Nelson of the University of Hawai’i at Manoa, co-lead author of the study.

The team discovered that a group of microbes called Psychrobacter appears to be the prime driver of the cycle. Psychrobacter forms 40 to 70 percent of the reef microbial community during the day. At night, these microorganisms are 100 times more abundant.

Changes in microbe composition over a day-night cycle show that coral reefs manipulate the chemistry of the surrounding seawater. “This function may modulate the number of microbes in the water, promote cycling of energy through a reef’s food web, or provide stabilizing effects to the ecosystem,” Kelly says.

Ongoing work shows that a reef’s health can alter the number and type of microbes in seawater, say the scientists, highlighting the consequences of altering reef habitats.

The work was also funded by Hawai’i Sea Grant and the Gordon and Betty Moore Foundation.