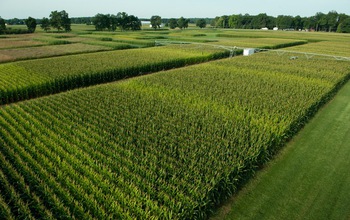 Farmers can’t predict their annual corn harvest with certainty, but with the help of new research, they can now pinpoint parts of their fields that consistently produce good or bad yields.

The information will save farmers time and money, and solve one of the most widespread problems facing crop-producing regions: nitrogen loss to the environment. The research was recently published in the journal Scientific Reports.

“This is the first time anyone has been able to quantify how much small-scale yield variability there is in the U.S. corn belt,” said Bruno Basso, an ecologist at Michigan State University (MSU) and lead author of the study. “These findings allow farmers to know exactly which portions of their farm fields have stable yields.”

That, he says, allows them to better manage fields to save on costs and reduce fertilizer losses.

“The work demonstrates that fertilization of consistently low-yield croplands is very costly to the farming industry, and offers a valuable approach to meeting the goal of precision nitrogen management,” St. Mary says. “What’s best for farmers is also best for the environment.”

Basso and MSU co-authors Guanyuan Shuai, Jinshui Zhang and Phil Robertson discovered that almost all fields have areas with consistently low or high yields. Much of the fertilizer added to low-yield areas goes unused by crops and is lost to the environment.

The team used satellite images to measure eight years of yields in 70 million acres of farmland across the Midwest corn belt. The data provided the researchers with a finely resolved image of the entire Midwest’s corn production, says Basso.

The scientists compared satellite data with high-resolution yield data collected by sensors mounted on combine harvesters at more than 1,000 farms.

By assessing how much money corn belt farmers spend on fertilizer that goes unused by crops, the authors concluded that the best outcome – for farmers and the environment – is to avoid farming the underperforming areas of each field.

The unstable areas can be managed well, the researchers found, with in-season management of nitrogen fertilizer.

“By putting big data at the service of sustainability, we are now able to provide farmers with a map of nitrogen fertilizer for their fields, which can change how and where they focus their efforts,” Basso says.

The findings give farmers a way to avoid over-fertilizing areas of fields that will lose the most nitrogen to groundwater, rivers and streams. “Nobody wins,” says Basso, “when fertilizer is wasted on areas that won’t produce.”