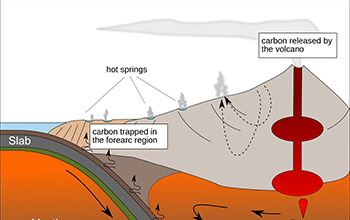 As much as 19 percent more carbon dioxide than previously believed is removed naturally and stored deep underground in seafloor trenches near island chains of volcanoes, according to a study in the journal Nature by scientists at the Woods Hole Oceanographic Institution, Rutgers University and other institutions. The process helps keep this greenhouse gas from entering the atmosphere.

The microbes that live in subsurface realms such as seafloor trenches play a significant role in storing the carbon, NSF-funded researchers have discovered. Incorporating carbon in their biomass may help subsurface microbes form calcite, a mineral made of calcium carbonate.

The study investigated how microbes alter the flow of carbon in subduction zones. Such zones are found where two of Earth’s tectonic plates collide, with the heavier plate sinking beneath the lighter one and moving material into Earth’s interior. Where a sinking, or subducting, oceanic plate dives beneath another oceanic plate, an island arc of volcanoes forms. Arc volcanoes are hotspots for carbon dioxide emissions that enter the atmosphere.

Increased knowledge of the long-term effects of volcanoes on carbon dioxide and how they may be buffered by biological processes is important for evaluating natural and human impacts on climate.

The research involved scientists at 27 institutions in six countries. Several NSF awards, including from the Division of Ocean Sciences, supported the study. The grants were made through programs that advance knowledge of the vast number of microbes in the subsurface biosphere, and the geologic and atmospheric processes in which they play a part.