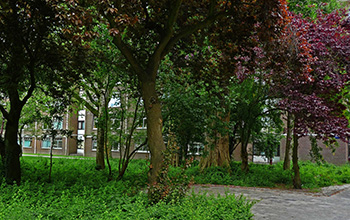 Best is 40% and above tree canopy cover

The concept of heat islands — densely built-up urban areas that are hotter than the rural and semi-rural landscapes around them — has been extensively studied and is widely accepted.

Now a new study takes a closer look at the urban heat island phenomenon and what can be done to mitigate it. According to ecologist Carly Ziter of Concordia University in Montreal and colleagues at the University of Wisconsin-Madison, tree canopy cover in an urban area can dramatically reduce the temperature of the immediate environs — enough to make a significant difference even within a few city blocks.

The research was funded by NSF’s Long-Term Ecological Research program and its North Temperate Lakes site.

In a paper published in the journal Proceedings of the National Academy of Sciences, Ziter and co-authors report that when canopy cover reaches a certain threshold, temperatures begin to drop dramatically.

“We found that to get the most cooling, you have to have about 40 per cent canopy cover, and that was strongest around the scale of a city block,” she says. “If your neighborhood has less than 40 per cent canopy cover, you’ll get a little bit of cooling, but not very much. Once you tip over that threshold, you really see large increases in how much you can cool areas.”

She adds that “trees transpire. They give off water vapor, almost like little air conditioners.”

That transpiration occurs mainly during the day. The research shows that at night there is a much smaller difference in temperature between areas with significant canopy cover and those without.