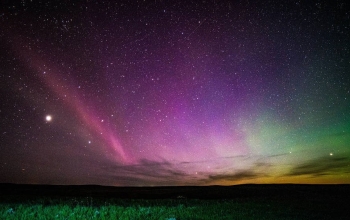 Glow is similar to typical auroras — also distinct from them

The bright purple aurora called STEVE — whose image went viral on the internet last year — is likely caused by a combination of heating charged particles in Earth’s atmosphere and energetic electrons like those that fuel auroras, scientists have discovered.

Yukitoshi Nishimura of Boston University and colleagues found STEVE’s source region in space and identified two mechanisms that cause it.

Typical auroras, the northern and southern lights, are usually swirling green ribbons spreading across the sky. But STEVE is a thin ribbon of pinkish-red or mauve-colored light stretching from east to west, farther south than where auroras usually appear. STEVE is sometimes joined by green vertical columns of light nicknamed the “picket fence.”

STEVE was dubbed a kind of “sky-glow” that’s distinct from auroras. Now the co-authors of a new study published in the journal Geophysical Research Letters have concluded that the reddish arc and green picket fence are two distinct phenomena from different processes.

The picket fence is caused by a mechanism similar to typical auroras, but STEVE’s mauve streaks are the result of heating of charged particles higher up in the atmosphere, similar to what makes light bulbs glow.

“Auroras are beautiful features in Northern and Southern Hemisphere skies,” says Lisa Winter, a program director in NSF’s Division of Atmospheric and Geospace Sciences, which funded the research. “These new results on STEVE will lead to more accurate models of space weather and its far-reaching effects on satellites and space-based communications.”