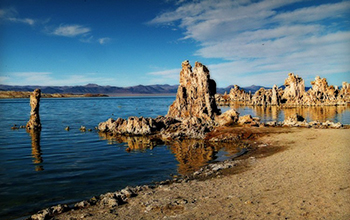 For most living things, arsenic is a deadly poison, but new research shows that microorganisms are breathing arsenic in a large area of the Pacific Ocean. A University of Washington team has discovered that this ancient survival strategy is still being used in low-oxygen parts of the marine environment.

The results were published in the journal Proceedings of the National Academy of Sciences.

“This study demonstrates that there are many secrets still to be discovered about how life in the ocean interacts with elements like arsenic,” says Mike Sieracki, a program director in NSF’s Division of Ocean Sciences, which funded the research. “Applying state-of-the-art genome sequencing methods has revealed these novel metabolisms.”

The scientists analyzed seawater samples from an ocean region where oxygen is almost absent, forcing life to seek other strategies.

“We’ve known for a long time that there are very low levels of arsenic in the ocean,” said co-author Gabrielle Rocap, an oceanographer at the university. “But the idea that organisms could be using arsenic to live — it’s a whole new metabolism for the open ocean.”

The team looked at samples collected during a research cruise to the tropical Pacific. DNA analyses found two genetic pathways known to use arsenic-based molecules as a way of gaining energy.

The pathways target two forms of arsenic. The scientists believe these pathways are found in two organisms that cycle arsenic back and forth in different forms.