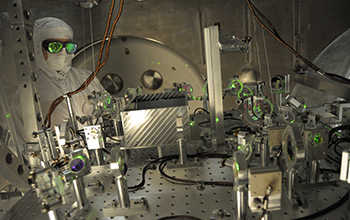 On April 25, NSF’s Laser Interferometer Gravitational-Wave Observatory (LIGO) and the European-based Virgo detector registered gravitational waves from what appears to be a crash between two neutron stars. One day later, the LIGO-Virgo network spotted another candidate source with a potentially interesting twist: it may have resulted from the collision of a neutron star and black hole, an event never before witnessed.

“The universe is keeping us on our toes,” said LIGO Scientific Collaboration spokesperson Patrick Brady, a physics professor at the University of Wisconsin-Milwaukee. “We’re especially curious about the April 26 candidate. Unfortunately, the signal is rather weak. It’s like listening to somebody whisper a word in a busy café; it can be difficult to make out the word or even to be sure that the person whispered at all. It will take some time to reach a conclusion about this candidate.”

“NSF’s LIGO, in collaboration with Virgo, has opened up the universe to future generations of scientists,” NSF Director France Cordova said. “Once again, we have witnessed the remarkable phenomenon of a neutron star merger, followed up closely by another possible merger of collapsed stars. With these new discoveries, we see the LIGO-Virgo collaborations realizing their potential of regularly producing discoveries that were once impossible. The data from these discoveries, and others sure to follow, will help the scientific community revolutionize our understanding of the invisible universe.”