Drilling into the seabed beneath Earth’s most powerful ocean current 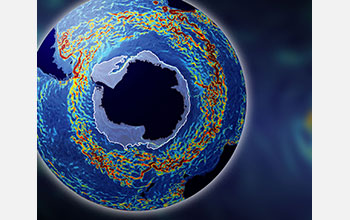 International expedition studies current’s past dynamics to understand its future

The Antarctic Circumpolar Current is the planet’s most powerful and arguably most important current. It is the only current to flow clear around the globe without being diverted by any landmass.

It connects all the oceans and is thought to have played a key role in regulating Earth’s natural climate swings over millions of years. But much is still unknown about how the current works, including how it might now respond to climate change.

Starting this month, some 30 scientists from 13 countries aim to study the current’s past dynamics by drilling into the seabed in some of the planet’s most remote marine regions.

They will set sail on May 20 from Puntas Arenas, Chile, aboard the scientific drillship JOIDES Resolution, to begin Expedition 383 of the International Ocean Discovery Program. IODP is an NSF-supported collaboration of scientists from around the world who study the history of the Earth as recorded in sediments and rocks beneath the ocean floor.

Adds the cruise’s co-chief scientist Gisela Winckler, a geochemist and paleoclimatologist at Columbia University’s Lamont-Doherty Earth Observatory, “this is a key piece of the world climate system, because it’s where so much heat and carbon are exchanged between the ocean and the atmosphere. We should learn about how the winds, the ocean and the Antarctic ice sheet have responded to warming in the past. That will help us know what they might do in the future.”