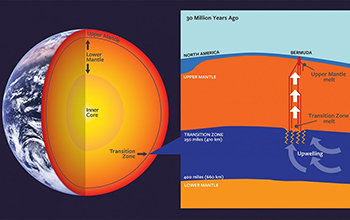 Geoscientists have discovered the first direct evidence that material from deep within Earth’s mantle transition zone — a layer rich in water, crystals and melted rock — can percolate to the surface to form volcanoes.

Researchers have long known that volcanoes form when tectonic plates converge, or as a result of mantle plumes that rise from the core-mantle boundary to make hotspots at Earth’s crust.

But finding that material from the mantle’s transition zone — some 250 to 400 miles beneath our planet’s crust — can cause volcanoes to form is new to geologists.

“We found a new way to make volcanoes,” says geologist Esteban Gazel of Cornell University. “This is the first time we’ve found a clear indication from the transition zone deep in the Earth’s mantle that volcanoes can form this way.”

Gazel and colleagues published results of their study in the May 15 issue of Nature. The research was funded by NSF’s Division of Earth Sciences and Division of Ocean Sciences.

Take the case of the island of Bermuda.

About 30 million years ago, a disturbance in the transition zone caused an upwelling of magma material to rise to the surface, forming a now-dormant volcano under the Atlantic Ocean, then forming Bermuda. “We were expecting our data to show that the volcano was a mantle plume formation — an upwelling from the deeper mantle — just like it is in Hawaii,” Gazel said.

The scientists say that the research offers a new connection between the transition zone layer and volcanoes on the surface of Earth.