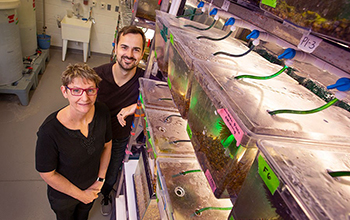 When it comes to choosing a mate, female guppies often go for mates with the flashiest, most interesting color patterns.

In a new study, Florida State University researchers found that the choices of these tiny, tropical fish can be understood through a common type of learning called habituation. Through habituation, animals — in this case guppies — stop responding to a stimulus after prolonged exposure and will be attracted to a new stimulus.

In other words, the female guppy is often immune to the charms of a male guppy that looks like all the other male guppies. Ones with unusual color patterns stand a better chance at successfully wooing a mate.

The results are published in the journal Proceedings of the Royal Society B.

“This work demonstrates that social environment has a direct influence on genetic diversity patterns,” says Leslie Rissler, acting deputy division director of NSF’s Division of Environmental Biology, which funded the research. “Only by understanding the social and ecological settings of organisms in nature can we fully appreciate how genetic diversity is maintained.”

Biologists exposed female guppies to a large number of males with the same color patterns, and tracked their responses to male courtship displays. In guppy courtship, the male guppy performs a type of dance around the female to express his interest. If the female wants to participate in this courtship ritual, she will respond to the approach and move toward the male.

The scientists say that no one had linked the idea of habituation and novelty to mate choice. The researchers believe their project is a good example of how ideas from different fields can be helpful in explaining biology.