First smartphone app that can hear ear infections in children 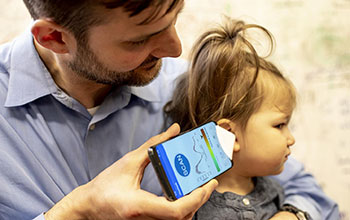 Ear infections are among the most common reasons parents bring their children to pediatricians, according to the National Institutes of Health.

The condition can occur when fluid builds up in the middle ear behind the eardrum and becomes infected. This buildup is also common in a condition called otitis media with effusion. Any kind of fluid buildup can be painful and make it hard for children to hear, which can be especially detrimental when they are learning to talk.

Both conditions are hard to diagnose because they have vague symptoms. Sometimes children tug on their ears or have fevers, and sometimes there are no symptoms. In addition, young children may not be able to describe where they hurt.

Now, with funding from NSF’s Directorate for Computer and Information Science and Engineering (CISE), researchers at the University of Washington have created a new smartphone app that can detect fluid behind the eardrum by simply using a piece of paper and a smartphone’s microphone and speaker.

“Here is a prime example of NSF supported fundamental research transitioning into practice and benefiting humans,” says CISE program director Samee Khan. “This product is especially important because it focuses on children during one of their critical developmental stages.”

The smartphone makes a series of soft audible chirps into the ear through a small paper funnel and, depending on the way the chirps are reflected back to the phone, the app determines the likelihood of fluid present with a probability of 85%. This is on a par with current methods of detecting fluid in the middle ear.

The team published the results in Science Translational Medicine.

“Designing an accurate screening tool on something as ubiquitous as a smartphone can be game-changing for parents and for health care providers in resource-limited regions,” says co-author Shyam Gollakota of UW. “A key advantage of our technology is that it does not require any additional hardware other than a piece of paper and a software app running on the smartphone.”

A quick screening at home could help parents decide whether they need to take a child to the doctor.