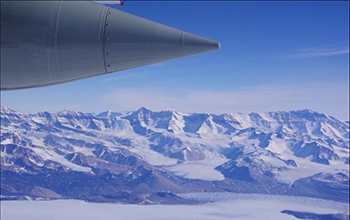 Scientists working on the ROSETTA-Ice project, a three-year, multi-institution survey of the Ross Ice Shelf in Antarctica, have assembled an unprecedented view of the seafloor beneath the ice sheet.

In a study published in Nature Geoscience, ROSETTA-Ice team members detail their finding of an ancient geologic structure that restricts where ocean water flows. The discovery suggests that local ocean currents may play a critical role in the ice shelf’s future retreat.

ROSETTA-Ice is funded in part by NSF’s Office of Polar Programs.

ROSETTA-Ice researchers collected data from the massive Ross Ice Shelf, which helps slow the flow of about 20 percent of Antarctica’s ice into the ocean — equivalent to 38 feet of global sea level rise.

The continent’s ice is already melting at an accelerating rate. Predicting how this ice shelf will change as the planet continues to warm requires understanding the complex ways in which ice, ocean, atmosphere and geology interact.

The new results indicate that models used to predict Antarctic ice loss in future climates need to consider the influence of seafloor geology on ocean currents near the ice front.

“It’s imperative that we develop models that accurately predict future ice loss and the resulting rise in sea level,” says Alex Isern, head of the Antarctic Sciences Section in NSF’s Office of Polar Programs. “Results from the ROSETTA-Ice project have provided us with a surprising and critical piece of this complex puzzle.”