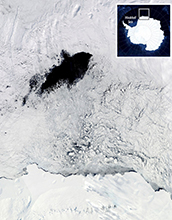 Winter ice on the surface of Antarctica’s Weddell Sea sometimes has an enormous hole called a polynya. A polynya that appeared in 2016 and 2017 offered a unique opportunity for oceanographers to monitor this expanse of ice-free water.

Research led by University of Washington scientists explored why the Weddell Sea hole appears only in some years, and what role it could play in global ocean circulation. To better understand the formation and evolution of polynyas, the scientists collected data from satellite images of sea ice cover, robotic drifters, and seals outfitted with sensors.

Results of the study were published June 10 in the journal Nature. The research was funded in part by NSF’s Office of Polar Programs.

“We thought this large hole in the sea ice was rare,” said lead author Ethan Campbell. “But events in 2016 and 2017 forced us to reevaluate that.”

Observations show that recent polynyas resulted from unusual ocean conditions, and intense storms that swirled over the Weddell Sea with winds that were nearly hurricane force.

The scientists’ analysis reveals that when the surface ocean is especially salty, as it was throughout 2016, strong winter storms can set off an overturning circulation. Warmer, saltier water from the depths is ferried to the surface, where air chills it and makes it denser than the water below. As the water again sinks, relatively warmer deep water replaces it, creating a feedback loop where ice can’t form again.

The study used observations from the Southern Ocean Carbon and Climate Observations and Modeling project, or SOCCOM, which releases instruments that drift with the currents to monitor Antarctic conditions.

“Data from the SOCCOM project are transforming our understanding of how ocean waters near the Antarctic continent and in the Southern Ocean influence ocean circulation on a global scale,” says Alex Isern, head of the Antarctic Sciences Section in the Office of Polar Programs.