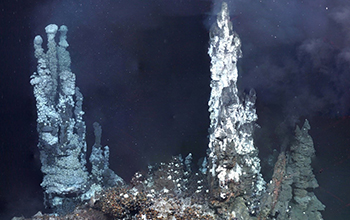 Hydrothermal vents may be hotspots for global carbon storage

Researchers at Stanford University have found an aquatic highway that releases nutrients from within the Earth and ferries them up to surface waters off the coast of Antarctica. There the nutrients stimulate explosive growth of microscopic ocean algae.

The study, published in the journal Nature Communications, suggests that hydrothermal vents — openings in the seafloor that release hot streams of mineral-rich fluid — may affect life near the ocean’s surface and the global carbon cycle more than previously thought.

Mathieu Ardyna, the study’s lead author, said the research provides the first evidence of iron from the Southern Ocean’s depths turning normally low productivity surface waters into hotspots for blooming phytoplankton — the tiny algae that sustain the marine food web, pull heat-trapping carbon dioxide out of the air and produce a huge amount of the oxygen we breathe.

“Our study shows that iron from hydrothermal vents can well up, travel across hundreds of miles of open ocean and allow phytoplankton to thrive in some very unexpected places,” he said.

Kevin Arrigo, senior author of the paper, called the findings “important because they show how intimately linked the deep ocean and surface ocean can be.”

Massive plankton blooms in this region could only be possible with an influx of iron. Ardyna and Arrigo quickly ruled out the ocean’s most common sources, including continental shelves, melting sea ice, and atmospheric dust, which were too far away.

That led them to suspect that the iron must be coming from below, possibly from a string of hydrothermal vents that dot a mid-ocean ridge 750 miles from where the massive blooms inexplicably appeared.

The research was supported by NSF’s Office of Polar Programs.

“This is a fascinating outcome, showing that iron from a source previously thought to have no influence on upper water column productivity may be fueling plankton blooms and the pumping of carbon into the ocean,” said Alex Isern, head of the Antarctic Sciences Section in the Office of Polar Programs.